When our Inca Trail guide Carlos visited us yesterday afternoon, he told us that his daughters were out of school today. He offered to bring them to town to meet us for a family day in his city. We eagerly accepted his offer of hospitality since we were on our own for the day in Cusco.

Carlos met us at hotel at 10 am. His daughters, Debbie (12) and Tais (8) introduced themselves and gave us all hugs. We piled into Carlos’s small car, with Greg and Carlos in front and me and the three girls in the back.

We were headed for the Chocolate Museum, but we did not make it three blocks before the tour operators called to tell us that they could not acquire train tickets. Apparently the train company only sells a certain number of tickets to tour operators; the rest are reserved for individual “walk-ups.” We had a new mission! Carlos turned the car around and took us to the train station. The line was terrible. We pulled a ticket like you do at the DMV and went out front to sit for a minute.

The girls were initially shy and reserved with each other, probably due as much to the language barrier as anything else. Debbie is studying English and could speak a little and translate. Genene knows a few Spanish words. She is, after all, a Texas girl, much to my mother’s chagrin. We spent a few minutes teaching them rock, paper, scissors, and that broke the ice. Then Carlos really got things going when pulled out a deck of Uno cards, and no more translations were necessary. The girls were soon playing cards and giggling together like old friends. It was amazing. 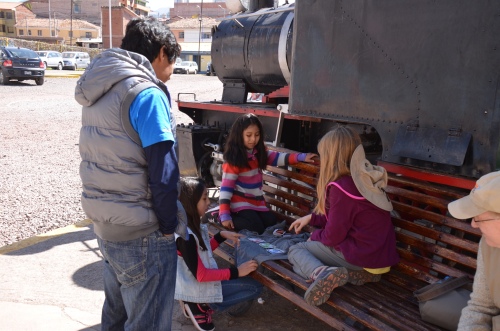 While we were waiting in the line at the train station, operations director Carla was scoping out another ticket sales office. She called Carlos to say, “There is NO ONE at the sales office at Plaza de Armas.” It was less than a mile a way. We abandoned the long line, jammed back into our car, and drove to Carla’s location, where we easily booked three train tickets for Machu Picchu tomorrow. We were glad to have that errand done.

You can see Carla in the red coat in the picture. She is the rock star director of operations at Enigma who has been taking such wonderful care of us:

Card sharks in the shadow of the Cathedral:

We crammed back into the car like sardines and headed out. The girls kept up their card games: 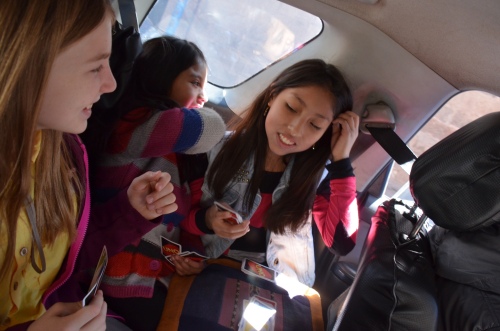 Carlos drives the streets of Cusco with elan: 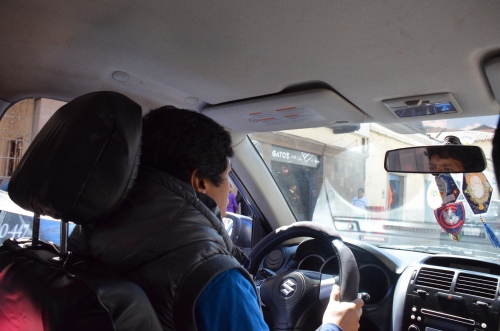 Carlos took us all to the Chocolate Museum. It was a commercial establishment dedicated to production of chocolate. Genene was instantly in love. It smelled heavenly in there. We tried chocolate tea, chocolate nibs, chocolate everything. The cacao tree can grow 40 to 50 feet tall. In the wild, it grows under a canopy. and is pollinated by midges, not bees. Most interestingly, it cannot release its seeds itself. It depends on animals or humans, and many times, it is the monkey who breaks open the pod to eat the sweet pulp and spit out the bitter tasting beans. Thank goodness for little monkeys!

There was a brief explanation about how chocolate is processed, and more nibbling.

I bought some chocolate liqueur and hot chocolate to try later, and the girls and I each picked out one piece of chocolate, which we later ate with gusto in the streets of Cusco.

Our next stop was to be Qurikancha, Temple of the Sun. Carlos turned into a “garaje” to park the car. From the street, a man opened narrow gates, and we pulled into a parking lot of sorts. There were sheds, and the cars were all double parked. Carlos pulled his car into the inside spot, and someone immediately double parked behind him. They discussed how long each of them would be gone, traded cell phone telephone numbers and we were off.

Walking the streets of Cusco: 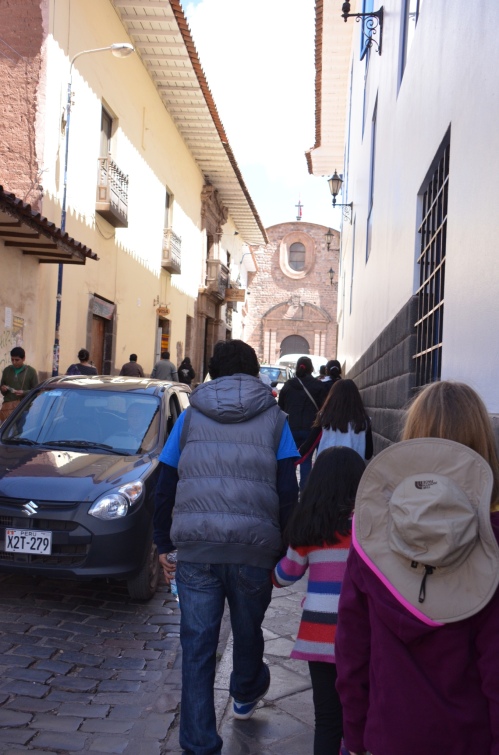 The Temple of the Sun was a Catholic Church constructed atop an Incan ruin. Carlos said that the Spaniards tried to tear down the Inca structure and could not, so they built around and on top of it.

A beautiful urn we saw along the way:

The first room we entered was dedicated to the worship of the rainbow. As I have mentioned, the Inca venerated the natural world.

The niches would have held idols or offerings. All windows, doors and niches are built in a trapezoid shape to provide stability, as this region has a lot of earthquakes.

The Inca built the altars and rooms for worship. Their finest stonework was reserved for these structures, and everything was done with excellence for the gods. Carlos told Genene, “If you do something with love and passion, you can make a masterpiece.”

Again, I am in awe of the stone work. As you can see from this picture, the stones fit together perfectly–no mortar.

It is true. You cannot slip a credit card between the stones.

At the time of the Inca, the temples were covered in gold and silver, and there were idols everywhere. When the Spaniards invaded, they took all the idols and melted them down for their gold and silver. Little remains.

There was a temple dedicated to the worship of thunder and lightning. It had three doors. The number three has special significance to the Inca, as they believe there are three worlds, basically sky, earth and underworld, although they do not have the same connotations as our sky (heaven) and underworld (hell). When people die, they are put into a fetal position to prepare them to be reborn into the next world.

Carlos explained a theory about how the stones are connected. As you can see below, there are two half-moons. These two stones would have been set next to each other so that a circle was formed. Then hot metal would have been poured into the circle, interlocking the stones together and making them more stable. 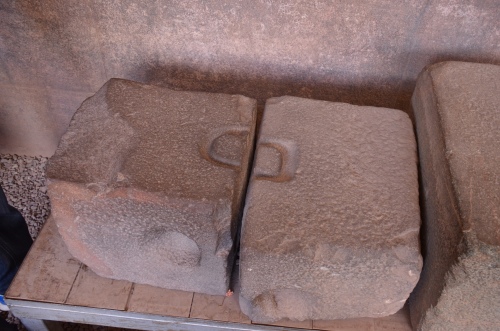 Since the Catholics could not tear down the Inca stones, they built on top of them. They also painted frescoes over them to hide the stones. You can see an example here, along with three beautiful girls:

Can you see the holes that almost look drilled around this window? The theory is that there would have been pegs in these holes, and then ropes or textiles could have been stretched along them to make patterns or decorations.

The Incas were great observers of the stars. These modern murals explain the important constellations, which included the llama, the puma, and others.

In the hallways of the Catholic Church, we saw a beautiful painting of Jesus Christ. Carlos explained that the painting was done by a local artist. Of course, when the Spaniards invaded, conversion of the Inca to Catholicism was accomplished by force, but the church did try to capture the minds and hearts of the people through the art of the church. In the painting, Jesus is dark skinned. He is on the cross and instead of looking up to the heavens, as is typical in a European painting, he is looking down at Mother Earth. Native flowers and plants adorn the painting. I wish I could show it to you, but no photography was allowed.

There was also an incredible mural of first Spaniard/Inca meeting. It did not go well for the Inca. The priest showed the Inca emperor a Bible, and the emperor tossed it to the ground. Bad move.

There were great views of Cusco from the church: 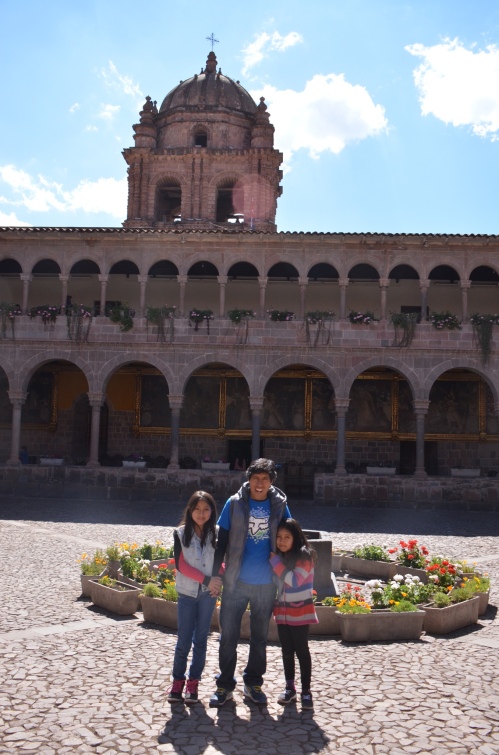 This is a recreation of a work of art that would have been in the Inca temple. You can see the Southern Cross, a rainbow, lightning, sun, moon, sacred animals, and people.

The tour complete, we went back to get the car and encountered a problem. The first double parker had left, and another had pulled into its place. This person had not been kind enough to leave a number or his keys, so our little car was trapped.

Trapped by the Rubicon: 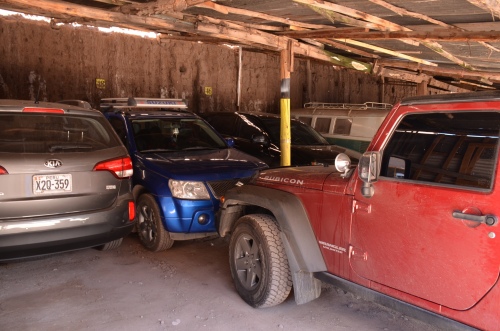 We waited around for a few minutes, but the owner of the car did not show up. Carlos talked with the lot owner and told him we were going to go for lunch or to the movies in the hopes that by the time we returned, the car would be gone and we would be free.

I love these two views from the garaje: 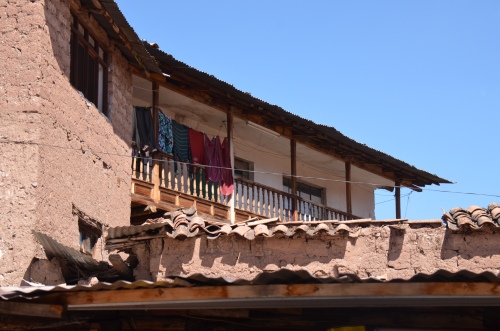 Carlos’s wife Elizabeth was planning to meet us for lunch or for the movies. She called on the cell phone to say that she had already been to the cinema and found that the only English speaking movies started at 9 pm, much too late for the girls. We elected to go to lunch instead. She met us on the street. What did we do before cell phones?

Carlos and Elizabeth showed us to an upstairs restaurant we would have never found, and we had a great little three course meal. The girls sat at a separate table and played Uno, Concentration, and Scrabble. We asked them how they were playing Scrabble and in what language. They were using English and Spanish. Greg joked that it gave them all a good opportunity to cheat. 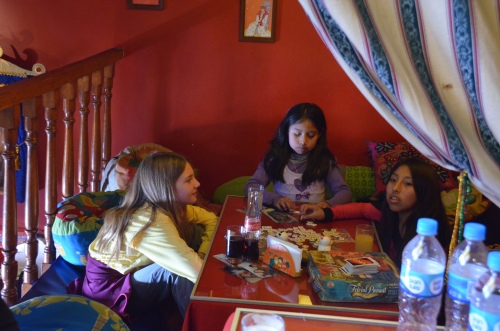 As we left restaurant, a small drama unfolded right under our noses. As we came down the steep stairs, two women in the traditional Peruvian garb came running across the street from us, a llama in tow. They were clearly frightened, and they jerked that llama up the stairs with them and said something about the police and pulled the gates closed to hide. Elizabeth explained that the police were chasing the women because they are not supposed to wander the downtown streets of Cusco with a llama, pestering people for money for photos. We saw the police van come by in hot pursuit. We played the part of lookout and told the women when the police van was gone. Aiding and abetting in Cusco!

I caught this picture as they raced up the stairs with their llama:

The lunch was leisurely, and it was 4:00 PM before we headed home.

Some street scenes along the way: 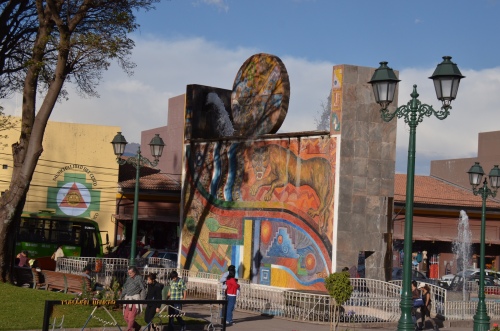 Carlos and the girls said their goodbyes and went to get their car. I hope that the double parker was gone. Elizabeth escorted us back to the Plaza de Armas so that we could get our bearings and walk back to the hotel. It was a lovely family day. We got to experience something very real. We talked to Carlos and Elizabeth about how they met, where they worked, where the girls went to school….we learned about their lives. Genene got to play card games with girls her age on the streets of Cusco. For a moment, we were not just tourists. We were two families, sharing a day. It was a wonderful bonding moment that I will cherish, and it’s something we would have missed on the Inca Trail. Carlos did not have to give us his free day with his girls to squire us around the streets, and I told him so. He said simply, “There is a saying here, and you must understand this. Mi casa es su casa.” Of course, I have heard that saying many times in my life, but it has never held as much meaning as it did for me on this special day.

2 thoughts on “Adventures in Peru 2014 Part Six: A Day with Carlos and family in Cusco”