We were all exhausted and went to bed early on Friday night after dinner and a quick stroll around the neighborhood. I had the best night's sleep I have gotten in many months. It is nice to have work worries off my mind for a while. We had breakfast at the apartment and set out on a morning adventure. Our goal was to head to Campo di Fiori, an open market. We wanted some fresh fruits and vegetables and thought we could take in some sights on the way.

FIrst things first. This next picture is for my mom. Mom, the apartment is really safe. Take a look at the locks!

So we locked up. We decided to navigate to Campo di Fiori by going to two certain landmarks. The streets are like spaghetti in a bowl, and it would be easy to get lost, I think. First we headed for the Trevi Fountain. The fountain was built to “show off” the termination point of one of the Roman aquaducts, and it is beautiful. Genene was annoyed because we did not have any coins for her to throw in. Legend has it that if you toss a coin over your shoulder and into the fountain, you will be assured a return trip to Rome. We promised Genene that we would be back to the fountain several times, since it is close to our apartment.

From the fountain, we navigated to the Pantheon and stepped inside for a moment to cool off. Our guide will bring us back there, so I won't linger here talking about it (since I don't know what I am talking about). I took a photograph of a small detail of the wall and column.

The next photograph is the exterior of the Pantheon. We'll be back.

We made it to Campo di Fiori just in time for Genene to say that she was tired and starving so we stopped for a quick bite of lunch and then made our way into the market. They had fruits and vegetables of every kind, all out in the open air. I drank freshly squeezed pomagranite juice, which was tart and delicious. We bought beautiful strawberries, blackberries, and cantaloupe. One of the more aggressive vendors talked me into a small glass jar of over-priced red pesto. It was very tasty, but I think I was caught up in the moment and spent too much. No worries. It will be eaten. I am sorry to say that I did not get any photos of the market. I am sure we will go back so I will try to remember to take pictures next time.

We got back to the apartment hot and tired. Greg and I adopted the “when in Rome” philosophy and took an afternoon siesta. We tried to encourage Genene to do the same, but she chose to stay up watching TV. Yes, they have Nickolodeon here too. Kids can rot their brains all over the world.

Today, we met our guide, Jose Grave de Peralta. He came to us highly recommended by the friend of a friend, and we were excited to meet him after several weeks of corresponding with him to set things up. Jose is a Cuban-born artist living in Rome. You can read more about his work here. We do not usually use a tour guide, but there is just too much to see and do in Rome. I felt we would be remiss if we did not get someone to help educate us.

Jose arrived on time and gave Genene a children's book on Rome. He laid out a map on the kitchen table and gave us some general orientation tips. Then we were off to the streets, with Jose leading us around our neighborhood. He walked us back down to the Spanish Steps and explained the significance of the things we were seeing. For instance, we had passed by a statue perched very high above the city. We had not even noticed it last night when we walked by it, but Jose explained that it was a statue of the Virgin Mary. Each December 8 is the Feast Day of the Immaculate Conception. The Pope rides in his Pope-mobile from the Vatican to this Piazza Mignanelli and rides a cherry-picker (!) up to replace the wreath on the Virgin Mary. The Pope has some interesting duties! 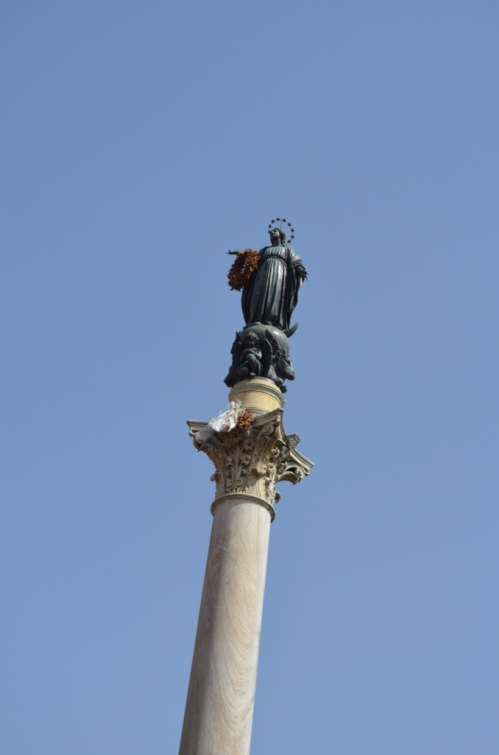 Jose is going to spoil Genene. Of that, I am certain. She mentioned that she wanted to try a cannoli (“Leave the gun. Take the cannoli.”) Jose took her straight down Via Condotti, Rome's equivalent of LA's Rodeo Drive. We watched them fill the tube shaped shell with ricotta and chocolate.

Jose and I each had a strong Italian espresso. I tried to drink it in one or two gulps, as the Italians do. It was delicious but made me sweat even more.

We ended our day much as we started it, with a return trip to the Trevi Fountain. This time, Jose explained what each of the statues symbolized, and the experience was much more meaningful. I won't bore you with everything (because I don't remember it all), but there are a couple of useful illustrations. Take a look at the photo below. Do you see the wild, winged horse on the left that appears to be out of control? He symbolizes how water can be “wild.” (Anyone who has sailed knows this horse.) The horse on the right is the calm face of water, tame water. Now take a look at the lady over the head of the left horse. She is carrying a cornucopia. That symbolizes water's gift to us in the form of making things grow. The woman on the right is carrying an urn and (you may not be able to see this) there is a snake coiled around and drinking from it. (Remember when snakes were used in pharmacies?) The snake in this instance represents healing, as in the healing powers of water. 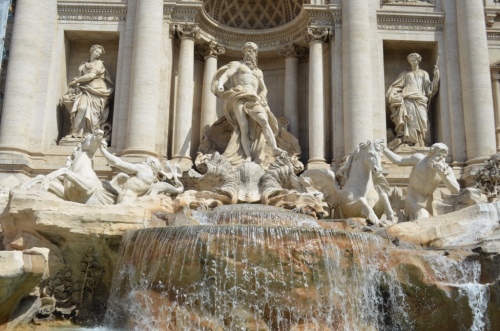 So you see that in the morning, all I could say is, “Wow, what a pretty fountain.” With Jose's help, we saw so much more in the afternoon. Best of all, we had a coin for Genene, so she got to make her wish. She was not shy about pushing her way through the crowds to get to the fountain, but in the end, she needed one block from Mom to make it all the way up to the fountain's edge. I do not know what she wished for.

Jose dropped us at the apartment in late afternoon, and Genene was exhausted. She tried to read the book Jose gave her but soon collapsed into a heap. It's 7:00 PM, and she's still snoozing.

We will wake her up soon and go out to eat. Tomorrow is a big day. We are heading for the Colosseum!