We have taken it easy today. We slept fairly late and went down the street to a cafe advertising an American breakfast. We were curious as to how they would interpret our morning meal. The menu was American: eggs, bacon, white bread toast, swiss cheese, coffee and orange juice. The waiter knew that Genene would not like the Italian-style coffee so he made her cappuccino, which made her feel special. It was all delicious, though Genene did not like the bacon. It reminded me of what I call “country-cured” bacon, the kind I had when we raised, killed and cured our own hogs back when I was in high school. The bacon was VERY salty, and Genene couldn't get past that. Greg and I did not have any trouble and cleaned our plates and hers too.

We came back up to the apartment for a few minutes to gather our gear and headed for Villa Borghese Gardens, Rome's answer to New York's Central Park. We rented a rickshaw and spent the next two hours pedaling around the park. It was relaxing and idyllic. I didn't learn a darned thing, and it felt good!

Genene drinks from all the fountains now, just as a Roman would. She learned to use one today with the up-spout. Water pours constantly from the downspout, and if you cover it with your hand, you get an instant water fountain. The water is very COLD and refreshing. 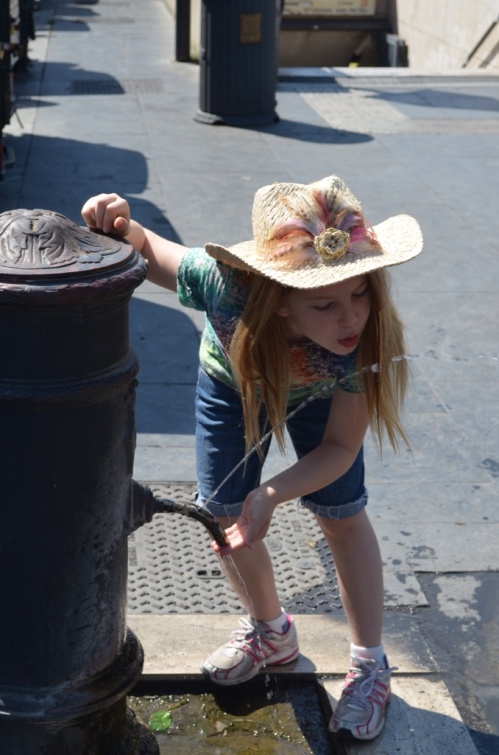 The views above the Spanish Steps on the way to the park are stunning. 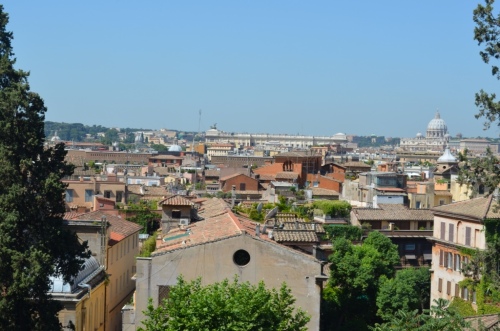 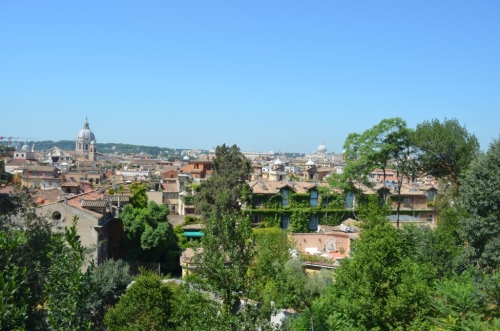 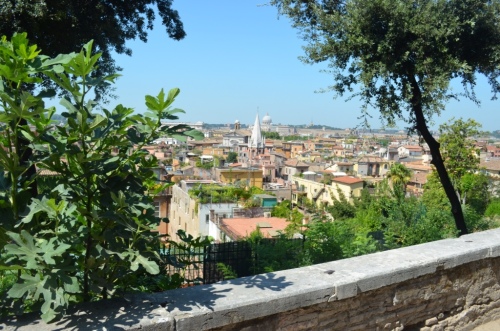 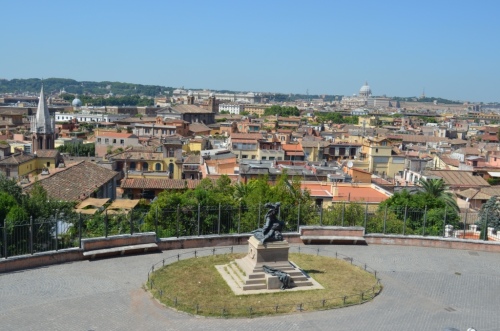 The fig tree is important in Roman mythology and in daily life. According to legend, when Romulus and Remus were born, their great-uncle ordered their death because he was afraid they would overthrow him. A servant could not bear to kill them and instead tossed them into a basket and set it on the side of the Tiber River. It floated downstream, where it lodged in some fig tree roots, thus saving the twins so they could grow up and quarrel over who founded the city known as Rome. Fig trees grow everywhere here, including out of the sides of walls. You can see the fig leaf on the left in the next photo. 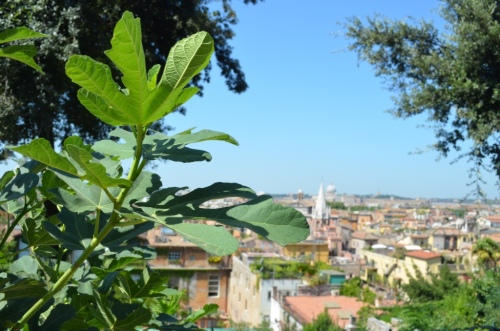 No building can be taller than the dome of St. Peter's Basilica, seen below. 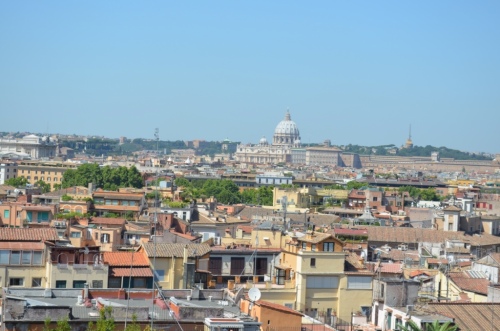 Since I did not bring my camera yesterday when we were in Galleria Borghese, we stopped back by to take a photo of the exterior. 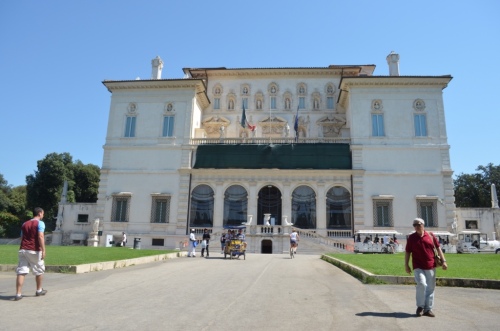 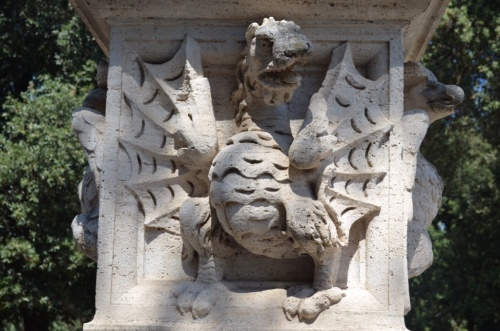 Greg and Genene pose in the rickshaw. 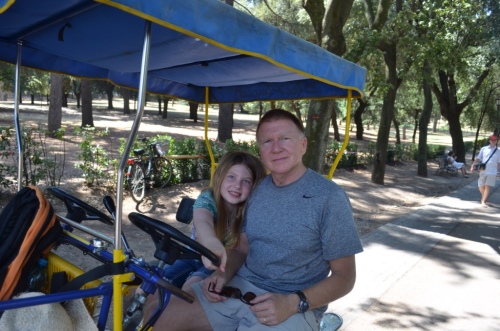 We found a playground with swings…. 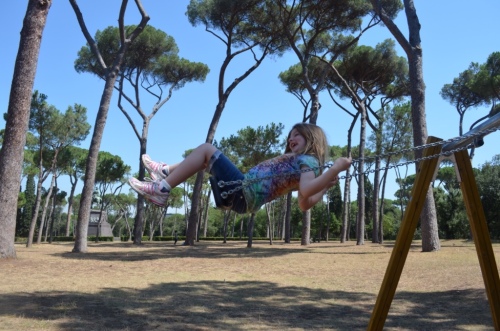 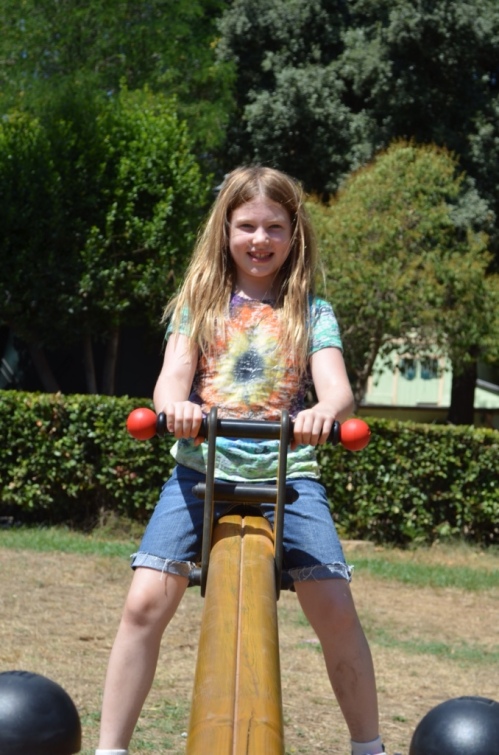 The pine trees are trimmed into these shapes. 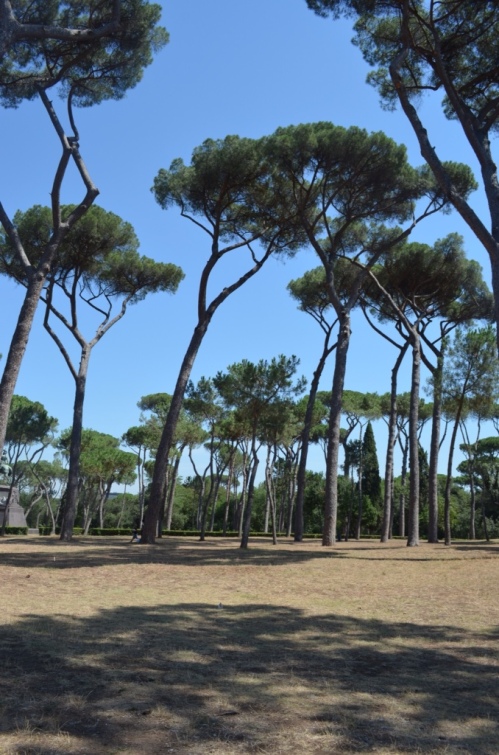 We found a pond filled with ducks and turtles. 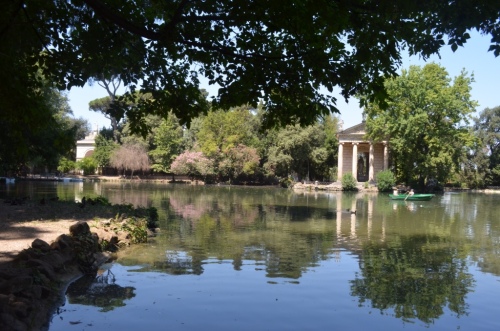 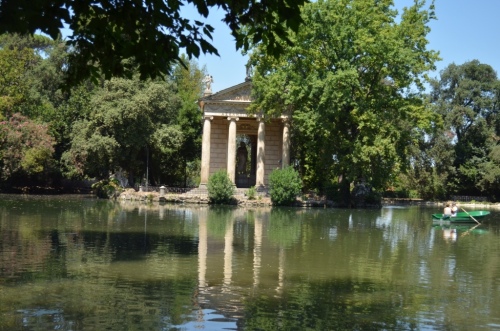 The view directly above Piazza Popolo is very beautiful too. 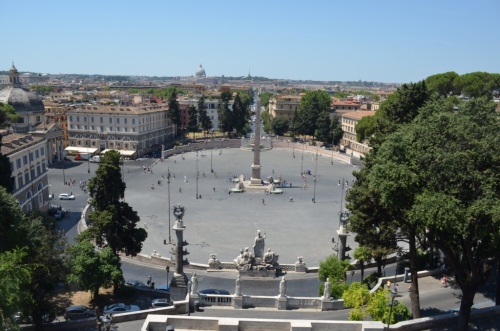 I always seem to be behind the camera. Greg forced me to get out in front for this one. 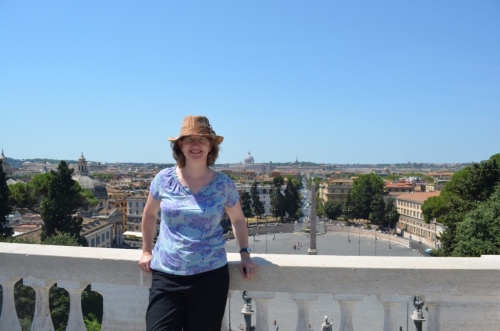 After two hours, we returned the rickshaw and retrieved Greg's driver's license, which was being held as a “deposit” to assure that we came back. The man only charged us for one hour's rental, and we were grateful for the small kindness.

We headed back to the apartment for the sandwich pizzas. 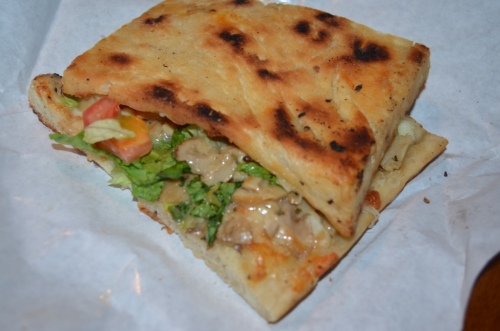 It's 4:00 PM now. Greg is waking up from the afternoon siesta. Genene and I skipped it today. I was not that sleepy, and she loves to watch TV. She is processing so many different sights and sounds out on the street. New languages, new customs, new food. Nickelodeon shows feel very familiar to her, and I am letting her watch. It's her vacation too.

I'm going to post this up early. I think the rest of the day will be low-key and will involve food, wine and relaxation. We are trying to rest up, because tomorrow we go see the Catacombs of St. Agnes, and Sunday is the BIG day trip to Pompeii.

If anything interesting happens later today, I will post up a supplemental blog. Otherwise, good evening and happy Friday!

2 thoughts on “Friday: A Walk in the Park (Villa Borghese Gardens)”