This morning, we left the comfort of Rivertrees to begin our adventure in the countryside. After a hearty breakfast, we said our goodbyes to Joel and the other kind people at the lodge and packed up. There are three families with us, and the other two families have two kids each, so there are five kids. Two are 14 years old, two are 11, and Genene is the youngest at age 9. The kids all rode in one car, while the adults are rotating in the other two cars. Today we would ride with Jim and Sheryl. The other couple had a car to themselves.

Our first stop was Arusha, often called the safari capital. It is the gateway for all safaris on the northern circuit in Tanzania. It is the home to the international tribunal that has judged the war crimes that took place in Rwanda some years ago, and apparently those trials are still ongoing. Justice runs slowly here, as in America. We stopped first in the Cultural Heritage Center, which amounted to a very nice upscale tourist shop. We got Genene a pair of tanzanite earrings. Tanzanite is a stone found only in Tanzania. It is blue/purple and very beautiful. We noticed Bill Clinton’s picture on the wall in the shop. I mentioned to the owner that I was born 35 miles from where Clinton was born. He replied, “Then you must be from Arkansas. You must know the late Don Tyson. He was one of my best clients.” I told the man that I didn’t know Don personally but had eaten a lot of his chickens. We Arkansans get around.

We drove through Arusha, and I was amazed at the teeming crowds of people. Many of them wore brightly colored clothes, some were pushing or pulling carts or riding bicycles or motorcycles. They were carrying every manner of thing: fruits, vegetables, water, supplies. People burn wood for cooking, heating water, warmth. The smell of smoke and gasoline was in the air, and we got the occasional whiff of weed. Arusha is a busy place.

It is about a three-hour drive over increasingly rough and narrow roads to Tarangire National Park. Along the way, we passed through several bustling towns having market days. Our driver told us we would not be stopping and that it was not polite to take pictures of people, so I do not have any photographs of this to show you. There were Maasai people everywhere along the roadside tending cattle and goats. The Maasai are the pastoral people known to everyone from the movies or “National Geographic.” Tall and slender, the men are typically clothed in red garments and elaborate beads. The women wear purple and have close-cut hair. They are nomadic and live as they did many years ago, tending their livestock. They do not kill their cattle. Instead they try to accumulate them; one’s status in the community is based on how many cattle are owned. The children tend the cattle, and they are YOUNG. They waved at us from the road.

Our guide mentioned that there are over 100 tribes in Tanzania. Each of them speaks a distinct language, but none of the tribes comprises more than 10% of the population. All Tanzanians are required to speak Swahili, and this common language unites them. Our guide explained that his father had two wives, but this is now frowned up and besides that, it’s too expensive.

We had lunch at the entrance to the park. Monkeys were hanging around at the picnic tables, waiting to steal any food left behind. We drove straight into the park and started looking for wildlife. It didn’t take long. We had not gone a quarter-mile when we saw large herds of zebra and wildebeest. Elephants, giraffes, impalas, lovebirds and warthogs followed close behind. We heard an elephant trumpeting repeatedly. That is an exhilarating sound:  Toto, we’re not in Kansas anymore!

We arrived in camp hot and tired at 5:30. We were greeted by the camp staff with cold towels and fresh juice. They demonstrated how everything in our tent would work. The tent must be zipped up at all times or creatures will get in. The tents have a king-sized bed with luxury sheets and a twinner for Genene. We are not roughing it that much. There are solar-powered lights, showers and a camp toilet in each one. If you want a hot shower, you must order it up. The camp staff brings what looks like a 5-gallon bucket full of water. You wet yourself, turn it off, soap up, and finally rinse. I was scared that the bucket would not be enough, but it is plenty of water to do the job. It made me realize how wasteful I am when I stand under the shower for 20 minutes. There are pitchers of water for hand washing and bottled water for drinking and brushing teeth.

Genene loves playing with the other kids and wants nothing to do with us. There is a mentor who rides in the car with them and plays games with them at camp. It is a joy to hear her shrieking and laughing as she plays. Thomson’s camp food is plentiful and delicious. We had potato and leek soup, beef, spinach, eggplant, salad, chicken, rice, red beans, banana split ice cream. There are several varieties of beer and Greg has tried Kilimanjaro, Tusker, Safari, Ndovu and Serengeti. He is still trying to decide which one is his favorite. 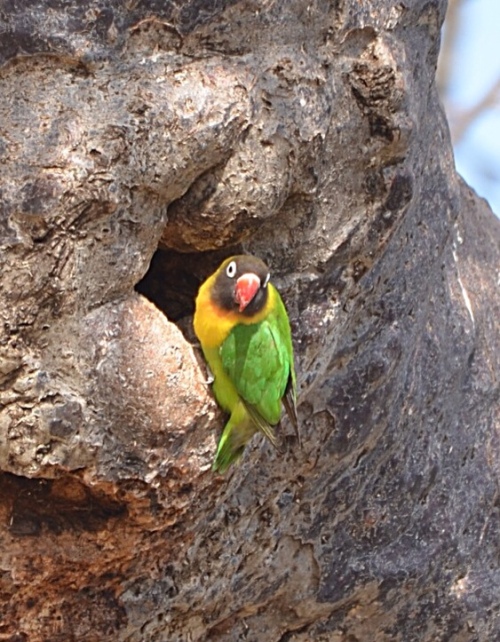 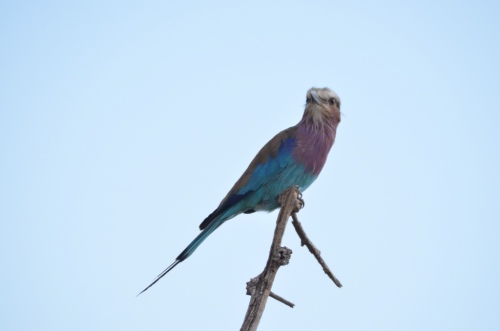 This elephant was giving herself and her baby a dirt bath: 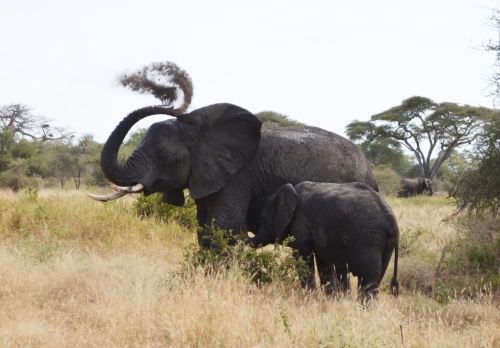 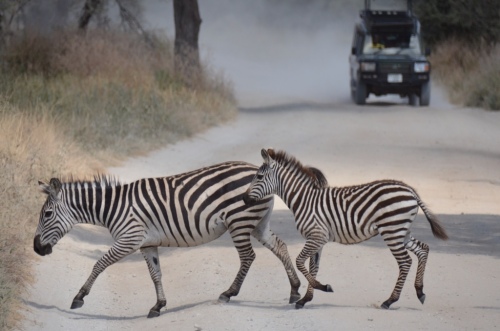 Impalas on the run: 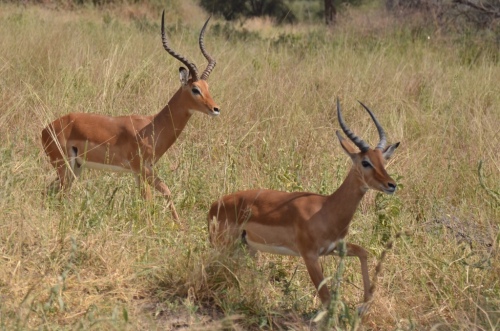 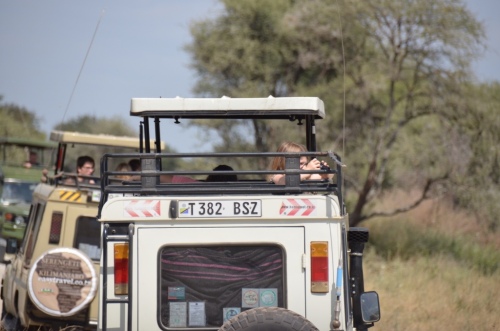 The baobab trees can be over 2000 years old:

Vulture on the nest:

Baby elephant running to catch up with his momma:

Looking right at me: 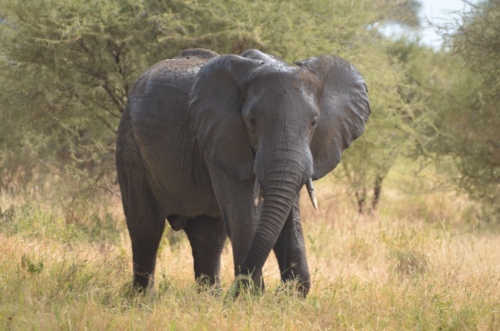 This girl is the one who kept trumpeting: 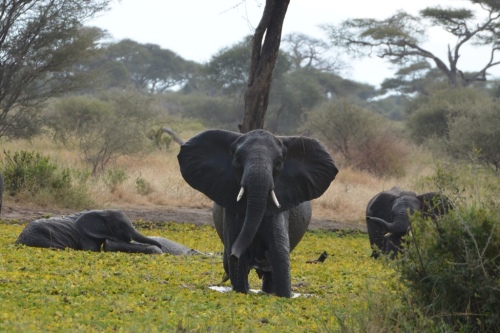 Playing in the water hole:

The giraffes love to peek at us from behind the bushes: 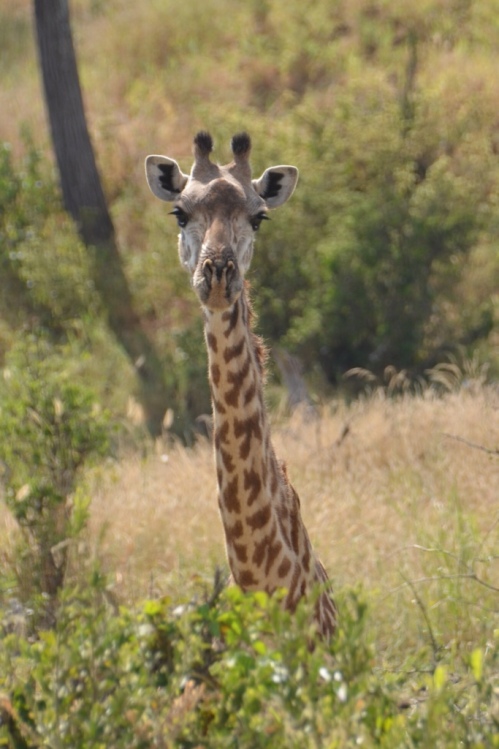 Zebras take their turn in the watering hole after the elephants finished: 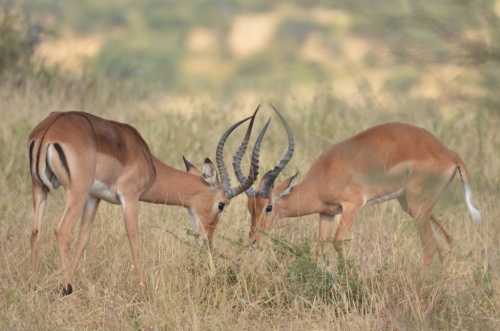 Zebra in the brush: