We left the comfort of Gibb's Farm this morning to head into the Serengeti. It was to be a long travel day on rough roads, so our guides programmed some breaks along the way. Our first stop was Olduvai Gorge, the site of early man. The gorge has yielded many early hominid fossils that provide keys to our human evolution. Drs. Louis and Mary Leakey began excavation work here in 1931, and they worked here for the entire lives. They are gone, but excavation work continues to this day. It is one of the most important prehistoric sites in the world. Four different species of early man have been discovered here, preserved in the different layers of volcanic ash and rock. The docent told us that early man began here and and from this place migrated all over the world. He said rather wryly, “Welcome home.” The exhibits there were very shabby, I thought, considering the importance of the area. Genene enjoyed seeing a plaster cast of footprints of the various hominids and looking at the various bones. The Houston Museum of Natural Science has a particularly wonderful exhibit on early man, and we had gone there a few months ago and thus our experience was enriched. 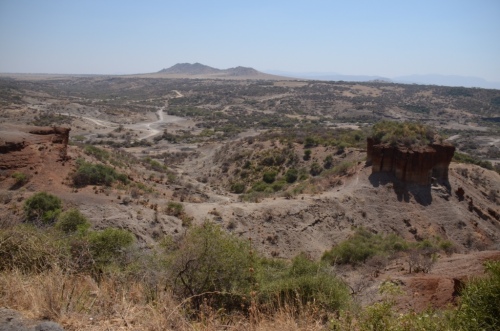 Fascinating little details are everywhere. This is the nest of a weaver bird:

We ate a boxed lunch at Olduvai before heading out again. A word about the boxed lunch: it was our biggest food complaint of the trip. The boxed lunches did not measure up against the tent food or the lodge meals. They were pretty plain and loaded with starch. Our tour operators were further hampered by a lot of special needs in our group. Our family did not have any issues, but among the group, we had a vegetarian, a person who wouldn't eat any mayonnaise, a person who could not eat nuts or cheese, a family that couldn't eat pork, and so on. By the time all these special orders are accommodated, it gets pretty hard to put something in a box lunch that is edible.

On the way into the park, we spotted camels by the roadside. They are not native to the area but are used by the Maasai. We stopped to get a photo, and two Maasai men materialized from nowhere. Our safari guides had warned us that Maasai frequently shake down tourists for a fee if their photo is taken, much like the Roman gladiators who worked us over last year near the Colosseum. No one in our car had even had a chance to take a photo, but the men wanted to shake our hands and talk to us. We did not pay them, and our guide drove on.

We got to the Serengeti gate in the afternoon and stopped to do our paperwork, stretch our legs and enjoy the view. Genene and the other kids enjoyed climbing a huge kopje and gaining a spectacular view of the Serengeti from the top. Kopjes, the rocky granite outcrops, can be found throughout the Serengeti. They stand out dramatically against the plains and have their own range of vegetation and wildlife. Lions love to take advantage of the shade and protection they provide. (think of Pride Rock from the Lion King).

The word “serengeti” is Maasai, and the loose, romantic translation is “the land that flows on forever” or sometimes “the endless plain.” 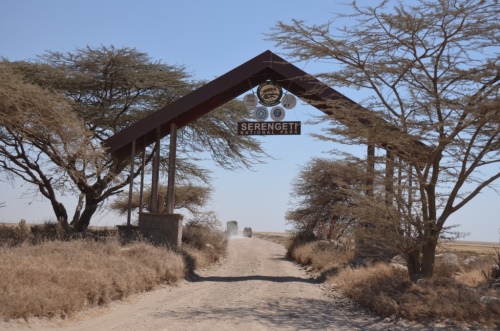 Colorful lizard on the rocks:

The view from the top of the kopje: 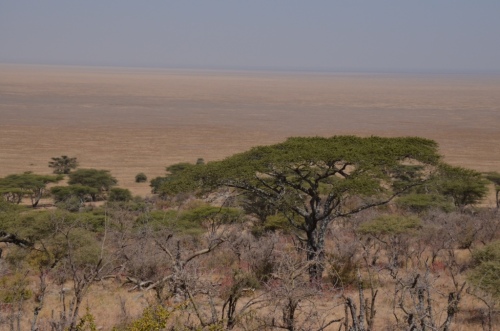 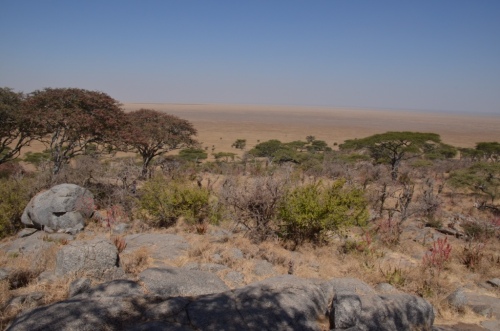 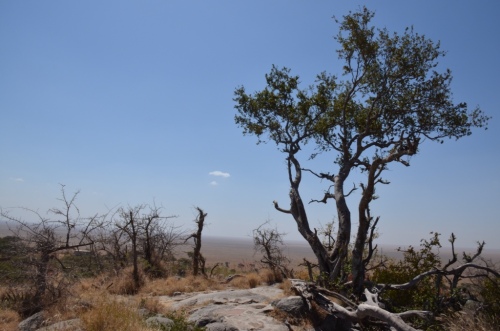 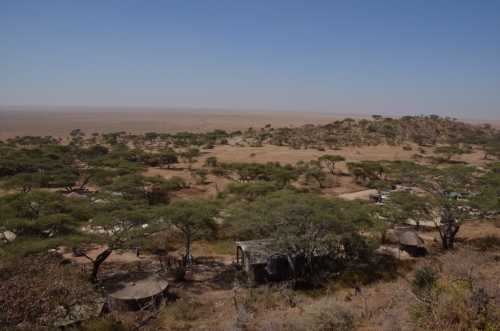 This may be my favorite family photo from the whole trip:

We entered the Serengeti and began our wildlife viewing. We were very quickly rewarded. Up to now, we had only seen lions from afar or middle distance, but we had an immediate close encounter. A huge crowd of cars was stopped by the roadside, always an indication of something going on. The guides communicate with each other via radio, and even competing company guides collaborate to locate wildlife for the guests. There was a lioness on the roadside walking among the cars!

The kids' car gets the closest encounter: 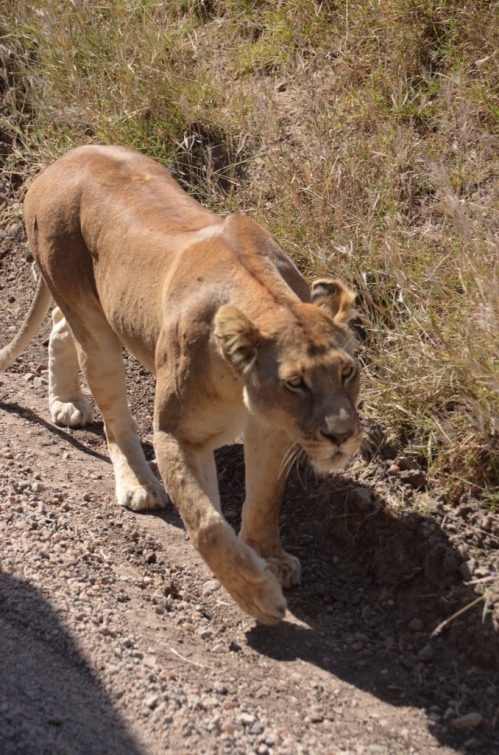 We drove on for a ways and spotted another crowd of vehicles by a hippo watering hole. At first we thought, “Ho hum, more hippos. We saw them yesterday.” (It is amazing how quicly we can become blasé about seeing something that we thought was incredibly exotic the day before.) In any event, as we sat there watching the hippo, a lioness came out from behind a tree.

We were startled, and then we got our second big surprise: a huge male followed close behind! They started mating right there in front of us.

It didn't take long, and our female squirmed around in apparent delight and satisfaction and went to lay back down again. 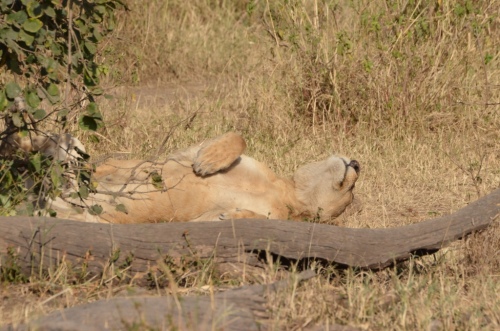 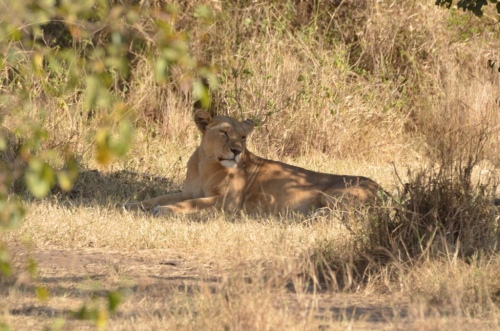 After a few minutes, our girl got up and sauntered by the lion again, and he got up, followed, and mounted her again.

I caught them in their moment of mutual bliss: 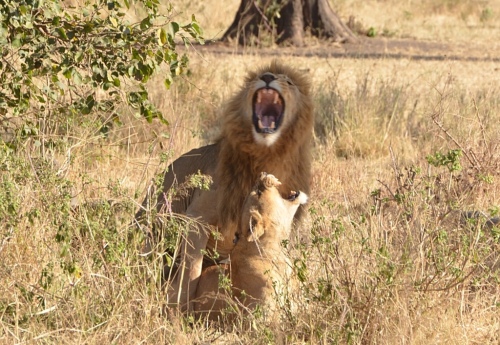 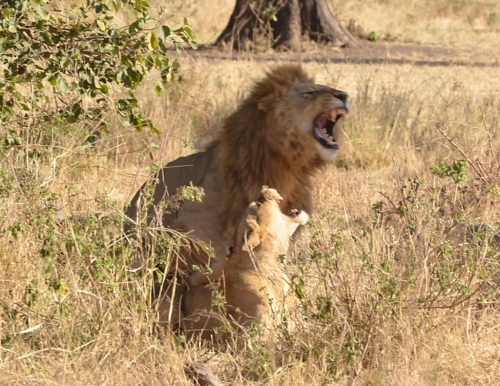 When we saw our man last, he was looking pretty satisfied:

The birds are showy, but who can compete with the king of the cats getting it on in the middle of the day: 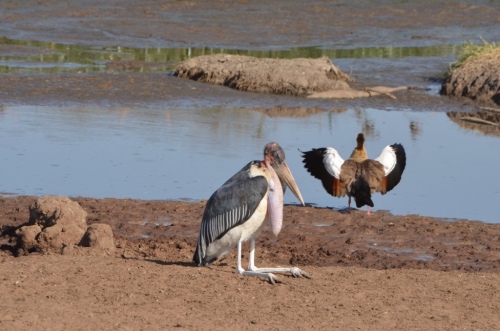 Leaving the Serengeti park for our private tent area:

We were greeted at the nyumba by camp staff with cold towels and fresh fruit juice. The sunsets in the Serengeti are absolutely spectacular, and I am amazed at how fast they happen. You can literally see the sun going down, dropping out of the sky like a stone. 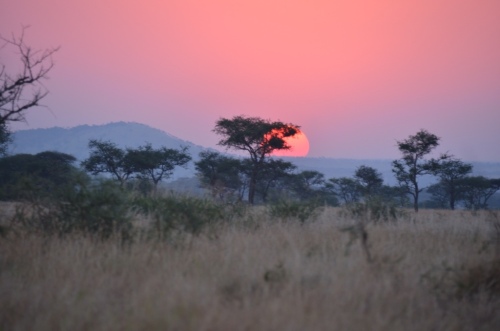 We had another delicious meal at the tent. Genene was thrilled that they had mac and cheese for the kids. We adults had cauliflower soup, beef tenderloin barbecue, spinach, pumpkin squash, potatoes, and mango crumble.

Greg, Genene and I will be separating from the group for a while tomorrow morning. We booked a balloon ride over the Serengeti, but the other two families did not. Our day will start early, so we are anxious to finish our supper and hit the rack.