For our second day at elephant camp, our experience would be different. We were going to the nursery to see the two babies–Dumbo and the other with a Thai name I cannot recall– and their mommas. The nursery is about a 45 minute drive from the main elephant camp. The moms and babies do not work at all, and they must have more to eat and more room to roam. They need a low stress environment in which to bond, grow and thrive.

The handlers jumped in the front of a small Toyota pickup truck, while we tourists hopped in the back. The backend of the truck was covered, and there were long benches to sit on. The California boys–Phil and his sons Antonio and Michael–were with us. There was just room for the six of us to sit in the back. The ride was, as my dad would say, “as rough as a log wagon.”

Our view from out the back of the truck. Elephants, water buffalo, scooters, and vans sharing the road: Dorothy, we are definitely not in Kansas any more.

We stopped in a longon orchard and bought the fresh fruit right off the tree. The fruit is translucent, sweet and juicy. There's a large hard stone pit in the center. I showed the California boys my Arkansas watermelon seed-spitting technique, and soon we were all having a spitting distance contest. I think I won. 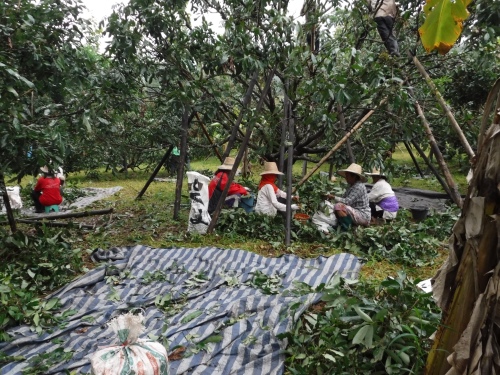 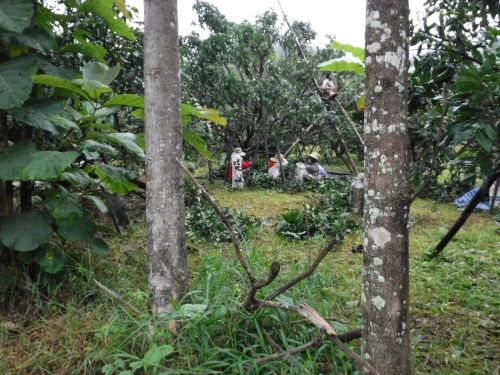 We continued on, and the road got narrower and narrower and muddier and muddier. Halfway up the hill, we stopped moving and the driver shifted into low and we could smell the rubber burning as the tires spun and spun and spun. You could smell the engine burning too. In the Arkansas woods with my dad as a kid, we've gone through many mudholes. If we had been in Arkansas spinning our wheels like that, I would have expected us to bury up the the axle, but there must be a firm ground a few inches under the muck in these Thai hills. Our driver eventually found it, we gained some traction, and continued up the hill. It happened again. And again. Each time, we were at a dead stop, but our driver got us moving again and we finally crested the hill. He pulled to the side of the road and told us we would walk the rest of the way.
He called this the “shortcut.” Can you see the trail? 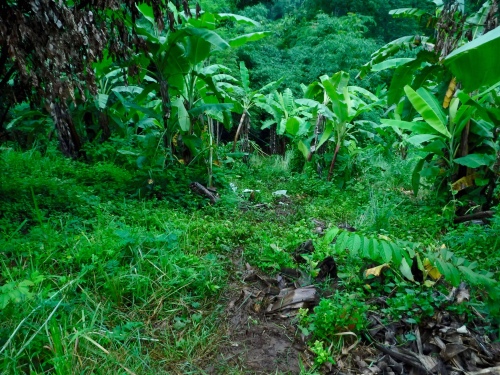 Picking our way down gingerly. I kept expecting to see Forrest Gump and Bubba. 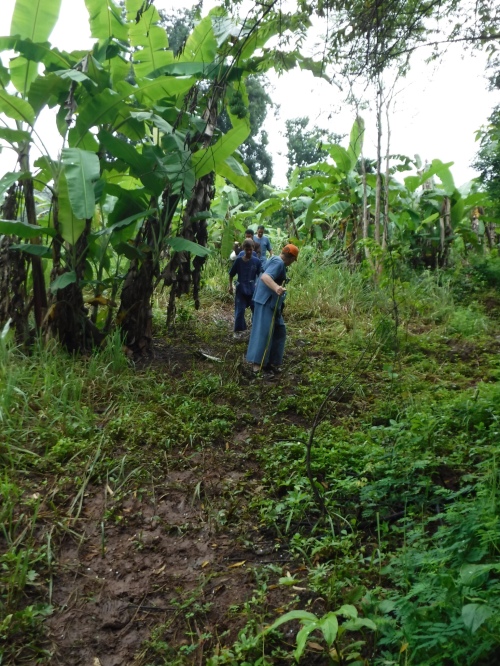 The road we had to walk down because the truck could make it no further.

First view of the elephant nursery.

We each received a basket of bananas. The mommas can eat them peel and all, but we were told that the babies should only get the peeled bananas. We couldn't peel fast enough, and they were giving us the bum's rush and trying to grab them out of the baskets. It was chaotic. The mommas had no problem snatching the bananas from their babies, and if a baby dropped a peeled one, it was GONE. 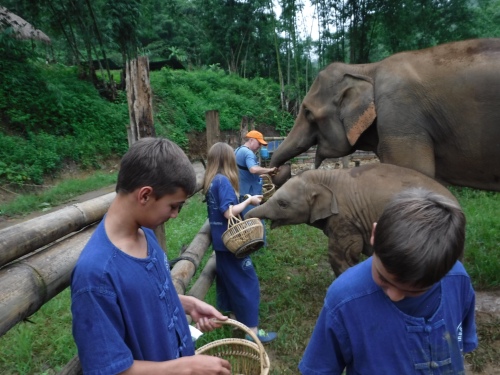 Got anything up there? 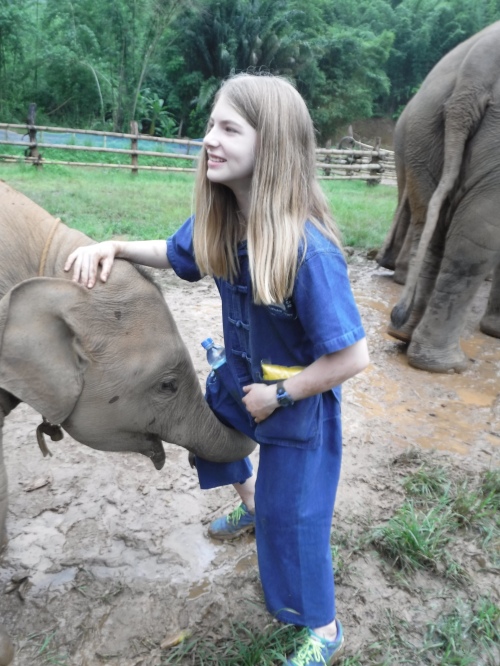 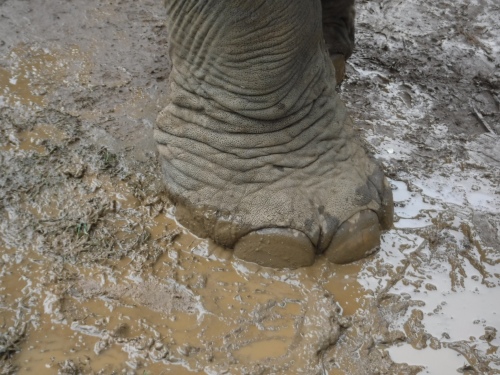 The mahouts let the mommas and babies out of the paddock, and we headed out into the surrounding woods.

The babies played king of the hill.

One of the guides seemed to be having a good time encouraging one of the babies to push and swing his trunk. The baby and the guide “boxed”, and the baby is already quite strong. I thought this seemed like a bad idea. When training a dog, you never want to teach it to play aggressively with you because you always want to be known as the alpha. It seems to me the same principle should apply to elephants, even more so with a multi-ton beast. Official training of the babies won't begin until they are three years old, and I think these two are around one or 1 1/2. Some day, the baby will probably get hooked for the behavior the guide was encouraging today. I didn't photograph any of it. The boys from California wrestled some with the babies and got pushed around. I didn't fault them for it. They were sweet kids. Boys will be boys, and everyone was laughing and having a good time. However, I was pleased that Genene didn't try it. When I asked her later why she didn't, she said simply, “I didn't want to be knocked down!” 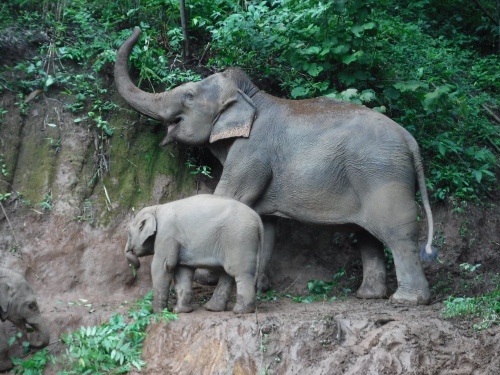 The mommas wasted no time and headed straight into the hills to eat. I heard one of them snap a tree, and it sounded like a gunshot. Not so many years ago, the elephants were used in the timber industry. They hauled the teak wood from the jungles and forests. 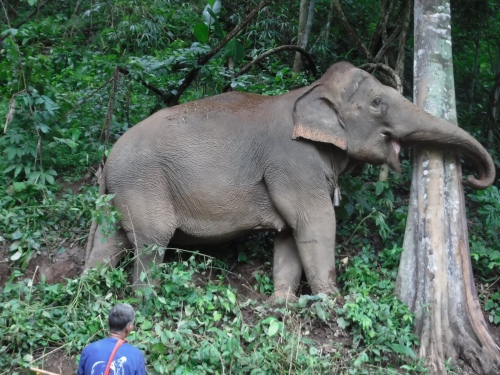 If you are at the back of the elephant parade, your view never changes.

While we were wandering in the jungle, I saw one of the elephants express some obvious displeasure. She flapped her ears and put her head down and gave a little trumpet sound. The source of the problem was apparent: a big yellow dog was following us, and Momma did not like him getting anywhere close to her baby. The mahouts shouted at the dog, and he retreated to a safe distance and continued shadowing us. It was the only time I saw any of the elephants upset.
Genene made it across this bridge. I tried to follow, with disastrous results. The water was waist deep and cold. The California crew took one look and elected to roll up their pants legs and ford the stream in a shallower spot up the creek. Smart move!

Just a girl and an elephant in the jungle. Nothing to see here.

Take a look at that teat!

Water buffalo in the field. The nursery area also produces crops for elephants and people. We saw rice and corn growing. 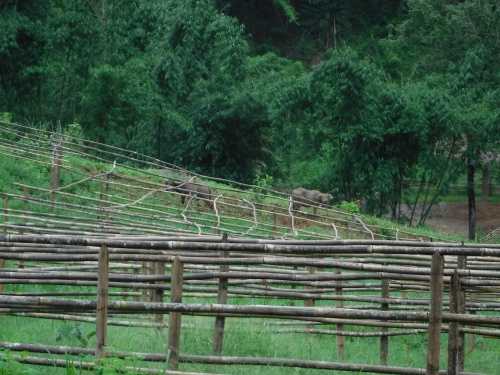 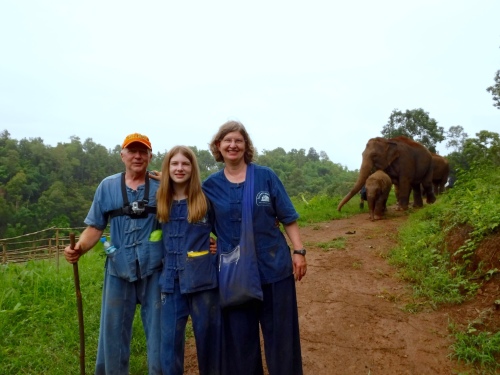 This guy was about two inches long and 3/4 inch wide. I guess I could have put my hand into the photo for perspective, but …no thanks. I think I saw his brother on a cart in Bangkok.

Football season is right around the corner. Go Hogs! 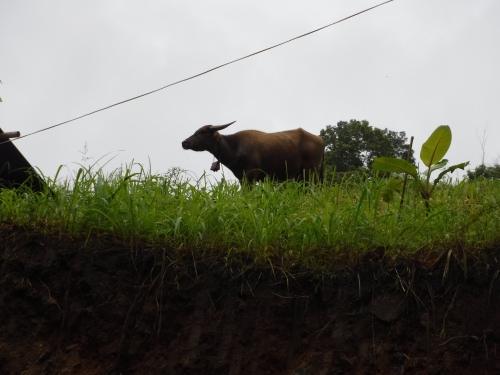 Our lunch today was fried rice with chicken in a banana leaf with fresh longon.

At the lunch stop, a scrawny yellow cat took right up with me. I fuss at Greg and Genene all the time, telling them not to pet any of the dogs or cats we see. Years ago, Greg tried to catch a loose dog in Memorial Park, was bitten, and had to take a series of rabies shots. I tell Greg and Genene that every time they think of petting an animal here, they should ask themselves if they are ready to end their trip and spend a $1,000 on shots. Of course, my heart melted when the old cat jumped right up and settled into my lap. I sat there stroking it while it purred. Do as I say, not as I do!
After lunch, the guides let the children ride the mommas for a few minutes to the mudhole.

We gave the mommas and babies a good mudpack. The guides tell us that it is good for their skin. It's a natural sunblock and insect repellent. Thai Elephant House elephants have the best skin in Thailand! 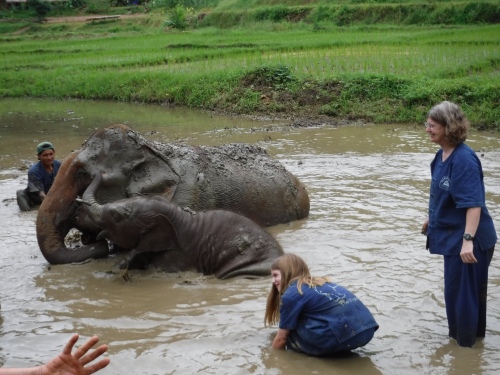 We went back to the running stream to wash the mudpack off. 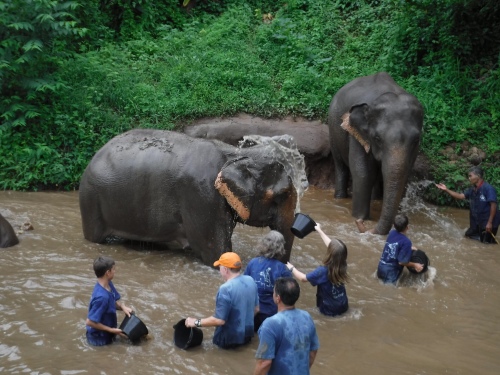 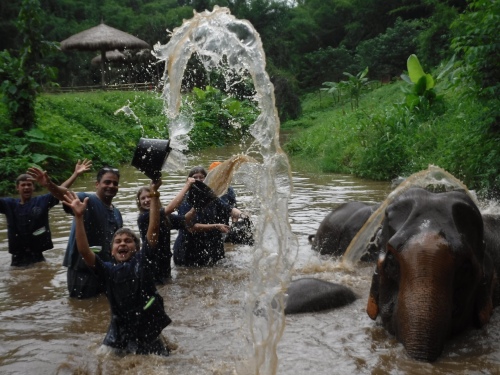 We said goodbye to the babies and mommas and took the shortcut back to the truck. We started down the muddy road. The dog ran after us for a good quarter mile. 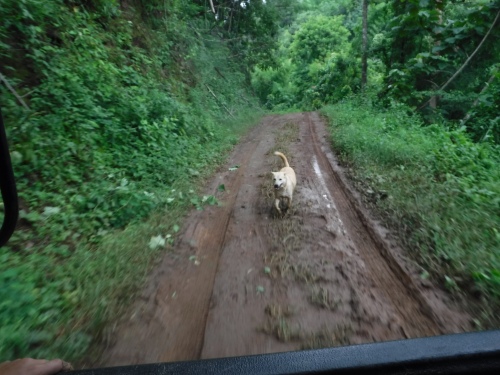 Greg was worn out when we got back to camp. He said he was ready to leave, but he knew we couldn't. Genene and I were tired but our spirits were better than his.
Our duplex cabin was simple. 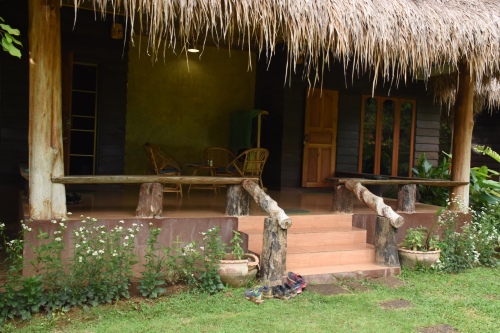 The camp was pretty.

Greg stood at the hill's edge and watched the elephants and tried to recover his usual good spirit. 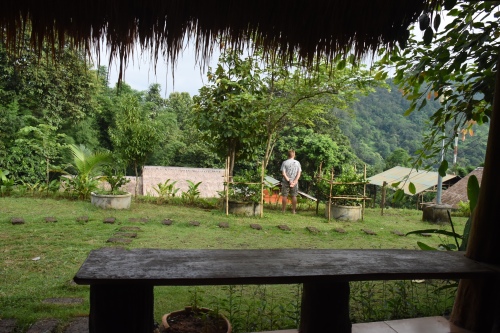 Genene sat inside playing games on her iPad.

We relaxed at our cabin and on the grounds. The California boys were not staying the night. I walked down to the muster point to try to see them off, but I missed them. I was sorry because we didn't get their email addresses or full names. I would have liked to stay in touch. They were great traveling companions for the day. The boys were good natured and adventurous. The father Phil has been on many travels and it was nice to listen to his stories.
We watched the guides cook dinner. These are omelettes in a banana leaf boat.

We sat around drinking beer and shooting the breeze with the guests and the locals. We met a wonderful old gentleman from Los Angeles. We never caught his name, but he was a delight. He had served in the Peace Corps in various African countries for 20+ years and then gone on to teach English in LA. He is retired now, and he decided to come to Thailand to live. He came on a trip here a few years ago and was enthralled. He's built a house up on the hillside and owns one of the elephants at Thai Elephant Camp. He told us he paid $30,000 for it. I can't really tell what that means, except he comes down every day to feed and socialize with the elephant and with us. He was in his mid-sixties, with two earrings in each ear, a large tattoo going down his arm–a delightful old hippy. He was an excellent raconteur, and he enjoyed listening to our stories as well.
We also met Johann from Belgium. He has obviously been bitten by the Thai bug. In a few years, I predict he will have his own elephant. He has been to Thailand 19 or 20 times in the past few years. (He has lost count.) He has been to the Thai Elephant Camp 9 or 10 times. (He has lost count.) He was quiet and didn't share his inner motivation for coming time and time again to this place. He must love the elephants. 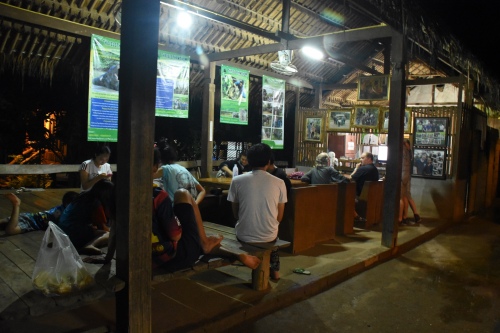 We went for the night feeding. 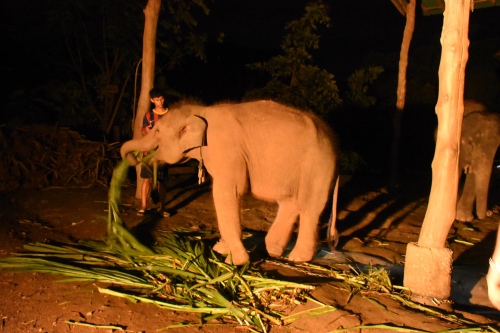 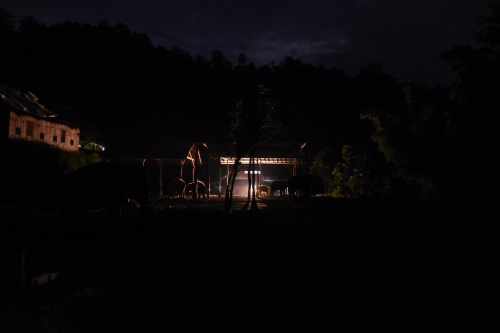 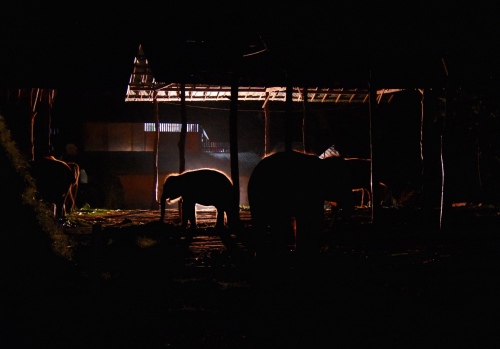 We were lucky enough to see the second full moon this month, the so-called blue moon. The next one won't be seen until January of 2018. 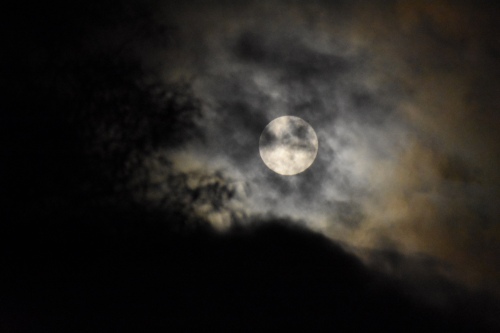 We are going to ride again tomorrow. Greg has asked for a different elephant to see if that will make him more comfortable. I hope that it will because Genene and I are having a blast.

Even a hard bed feels good when you are exhausted.