This morning, we made the short jump from Adelaide to Kangaroo Island.  We were flying a regional airlines, REX, with a very strict weight limit on bags, so yesterday we spent time loading our safari duffel bags so that we could leave our larger rolling bags behind.  We did not know exactly how luggage storage would work, but our driver told us that REX would be able to tell us everything.  I had spent some time the night before tossing and turning because I didn’t know exactly how it would all pan out.  I should not have worried.  REX knew just what to do:  they checked our bags to be stored and told us they would be waiting for us when we got off our return flight (fingers crossed).  They charged us $7.70 per bag (Aussie dollars, which are worth about 80 cents each).   Our biggest problem was that my backpack (loaded to the gills with camera gear) was overweight.  No worries, mate.  Greg’s backpack was much lighter so I unloaded two heavy lenses, enough to balance the load, and we were off to the gate.  As soon as we got there, we returned the lenses to my camera bag, which has better padding.  I am not sure why they wouldn’t just let us average the weights but we got it done.

We left at about 9:30 AM.  The flight was short, about 30 minutes.  We were each in single side seats on different rows so there was no visiting.

We always like to have one “splurge” locale and hotel on our trips, one place where we enjoy creature comforts and fine dining.  We selected Southern Ocean Lodge for this trip.  They run an all-inclusive eco-resort on the island, and the price of the room is all-inclusive:  food, beverage, minibar,walks, tours.  There are only 21 rooms at the lodge, so it is billed as THE exclusive spot for Australia’s Galapagos.  Woo pig sooie!  We are about to get fancy!  When we got off the plane, the Southern Ocean Lodge representatives were waiting for us.  Eleven of us boarded the bus and began the hourlong journey to our lodge.  Along the way, our guide asked if we wanted to stop and look for the mother whale and baby that have been seen from the shore at Hanson Bay.  The vote from the passengers was unanimous, thank goodness.  “Of course!”  Our driver said it was quite unusual to see a whale here this time of year, especially in the bay.  This whale had recently calved, and the theory was that she was making sure her baby could travel before moving out.  We were so lucky.  Moments after we piled out of the van at Hanson Bay, we saw her.  Again, I wished I had my 500 mm lens, but I got her with the 300 as best I could.

You can see from head to fin in this one.

We hadn’t even arrived at the resort yet, and we had already seen a whale!  Magical!We arrived at the Lodge in the late morning.  An entourage came out to greet us, calling us all by name.  Our bags were whisked away, as we walked down a pathway, approaching a large set of double doors.  As we approached, they opened, and more staff members greeted us.  Greg felt as if he needed to click his heels together and salute.  We stepped into the most stunning great room I have ever seen.

The dining area has a view of the lodge and the Southern Ocean.

We were invited to sit down in the great room and have a glass of wine.  I felt more relaxed already.  Each family made itself at home in different areas.  A lodge representative soon found us and discussed our proposed itinerary.  She told us that it was only a suggestion, but their plans for us included some tours.  Today would be free, but tomorrow morning, there would be a morning tour of the island, and tomorrow evening, a trip to see kangaroos in the wild was scheduled.  Thursday, there was to be a morning cliff top walk and in the afternoon a tour to Seal Bay.  I realized that I might have to reconsider the “no tour” idea I had in my brain.  After our briefing, she showed us to our room, and our bags were already stacked in the closet.  She showed us how everything worked, including the floor warmers!  The view from our room was simply spectacular.

Each of the 21 rooms is named for a Kangaroo Island shipwreck (foreshadowing!), and a book about all of the shipwrecks is in each room.  Our room was the Goulbourn.  We eagerly read our about room’s namesake.  The Goulbourn was an iron barge that left under the tow of a steam tug, the Melbourne.  The crew on the Goulbourn consisted of the master, two crewmen, and a cabin boy.  On June 29, 1866, they encountered rough weather, and there is some indication that the captain of the steam tug may have led them off course, as they were not even slated to come to Kangaroo Island.  The Goulbourn took on water.  The tug hung around until the Goulbourn sank but never got close enough to render assistance.  People watched the barge go down from shore and were critical of the tug captain and his failure to launch a rescue attempt, but they did admit that the seas were rough and they could not mount a rescue from land.  As soon as the Goulbourn sank, the tug proceeded on its journey.  The crew of the Goulbourn was never found.  Nice knowin’ you, mate!  Where’s Gordon Lightfoot when you need him to strike up a happy tune?

The view from our deck.

I like this next shot.  I am actually outside taking a photo of Genene in the room.  Her smile is genuine.  As soon as she saw the comfy chairs, the lamington welcome, the fully stocked minibar and her bed sitting in the window, she said, “This is the life!”

The iPhone panorama shot is pretty useful when you want to show the big picture.  Get a load of Genene’s bed, sitting in the window.  She’s got the best view of all.

After some obligatory wallowing on the fine sheets and rifling through the minibar, we washed up and headed to the great room for our three course lunch.  We all started with yellowtail kingfish ceviche.  Genene and I had slow cooked lamb with charred corn.  Greg had Boston bay mussels with fennel.  For dessert, we ate rock melon with honey infused parfait.  We were like pigs in slop.

After lunch we strolled around the great room and common areas.  I found the wine room and made Greg take a picture of me.

The Razorback in slop.

We came back to our room and continued to be dazzled by it.  We stared out the window for a while, thinking thoughts like “I’m king of the world!!”  Genene spent some time drawing.  Her friend Jose from Rome tasked her long distance via Facebook with sketching Uluru from memory, and she sat on the floor happily and worked on that project.  Greg and I took a short nap.  By the time we awoke, Genene was sleepy and wanted to stay in the room.  We let her nap while we took a walk.

There was a long boardwalk winding through the scrubby trees and bushes down to the beach.  We needed our jackets for the afternoon was very cool.  A wind from Antarctica was blowing on us.  The water is the bluest I have ever seen. 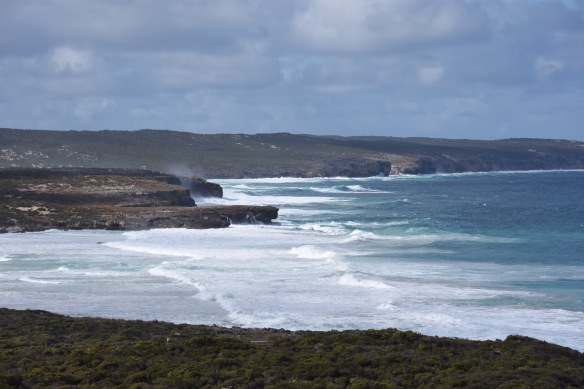 The waves were big and rough, and shoreline was littered with rocks.  I felt sorry for the poor men of the Goulbourn.  They never stood a chance when they hit the water. 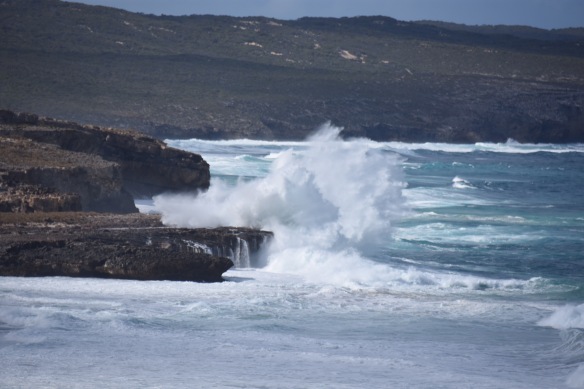 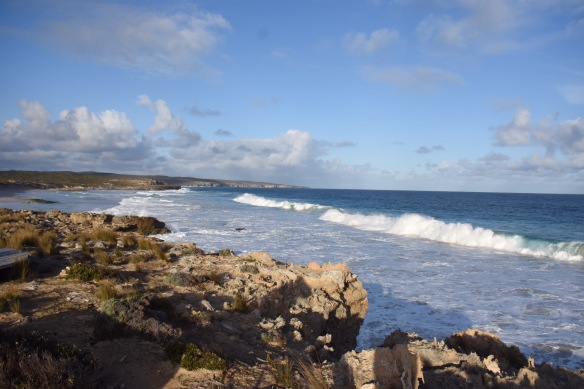 As Greg and I strolled along the beach, a light rain caught us off guard so we made our way back up the boardwalk.  We hadn’t even stuck our feet into the Southern Ocean.  We told ourselves we would bring Genene back tomorrow or the next day and check that off our list.

We went back to our room, roused Genene from her slumber, an explored the rest of the lodge.  There was no TV in our room, but there was a common room with a large TV and DVD player, as well as board games and cards.  Perhaps we will have a movie night tomorrow or Thursday.  There was also a separate building with a  spa.  A massage sounded great, but I wasn’t sure when I would fit it in with all the activities that had been suggested to us already.

From 6 to 7, drinks and canapés were served in the great room, and we indulged.  The lodge places an emphasis on Australian wines, and I tried some Shiraz and Cabernet.  Some wines are even produced on the island.  Greg was delighted because they had a row of refrigerators devoted to beer.  Dinner began at 7, and it was a multi-course affair.   We started with a little egg palate teaser, followed by a lettuce appetizer for Greg and me, while Genene chose blue crab and abalone.  I had a snapper for the main course, while Genene and Greg had Wagyu beef.  For dessert we had a banana mousse with ice cream and Genene had mini-magnums, fig and passion fruit ice cream dipped in dark chocolate, and white chocolate ice cream dipped in white chocolate.  The wait staff greeted us by name and wanted to know about our day.  We felt pampered and glad to be on the “slow train” for a few days.

We strolled happily to our rooms and off to bed.