I had chased the light yesterday morning, so I just decided to sleep until breakfast. It felt very nice.

I love how peaceful she looks when she is sleeping. When she wakes up, she’s off like a rocket!

We had breakfast on our terrace again, wearing our plush white robes and slippers. It was quite an indulgence. 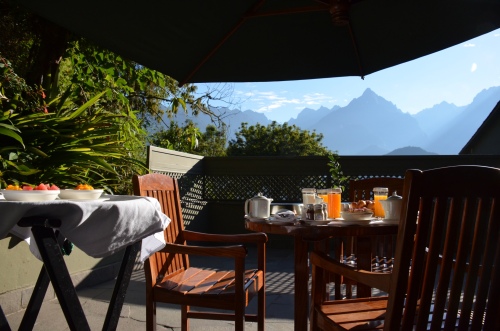 We went for another quick walk on the trail down to Aguas Calientes. We promised our friend Jamie Johnson that we would take some pictures in his t-shirt, since we trained with him for weeks to prepare for the trail. It would have been nice for him to be able to tell people that his training got a family up the Inca Trail, but it just didn’t work out. Hey, the pictures will look nice on his website anyway!

The Sun Gate mocks us from above:

I take a moment to rep the Hogs:

Genene ran ahead of us on the trail. I really think she could have done the whole Inca Trail: 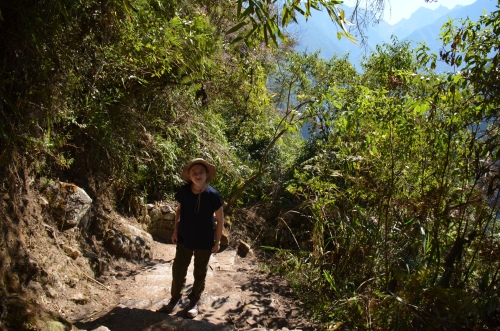 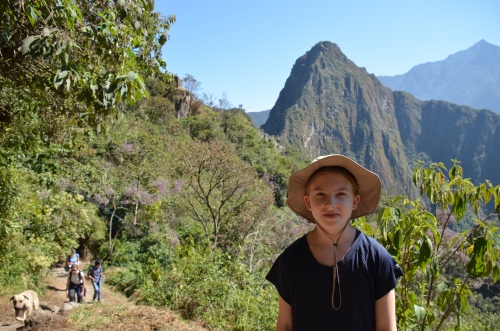 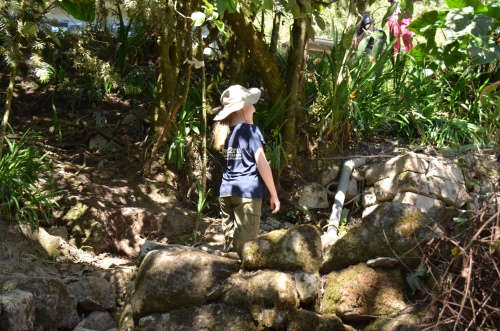 The line to get into Machu Picchu is seen here:

Hotel check-out was at 11 AM, so we got ourselves packed and organized and left the magical delights of Sanctuary Lodge. It certainly was aptly named.

The lodge concierge told us there was no need for us to carry our big bag down the mountain. They gave us a claim check and told us that a representative of Sanctuary Lodge would be at the train station to give us our bag and help us to board the train. Everything they did was first class. Maria, the lady at the front desk who tended to our every need, told us that we were a wonderful family and that she would remember us in her heart forever. What a charming thing to say. I’m sure she will not remember us, but we will remember her.

We rode the bus down the switchback path from Machu Picchu to Aguas Calientes (hot springs) town. I admire the bus drivers. They meet in the curves and all along the roads, and it is a delicate ballet for them to cross in just the right place so there is room for each to pass. They actually drove very smoothly down the hillside. The cab ride into Cusco was much more nausea inducing. Perhaps it had to do with the lower speed of the bus.

We walked around the town and I took street scene shots. 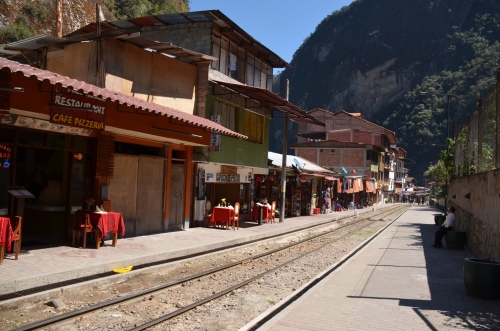 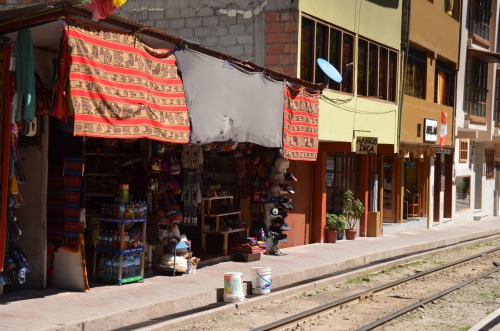 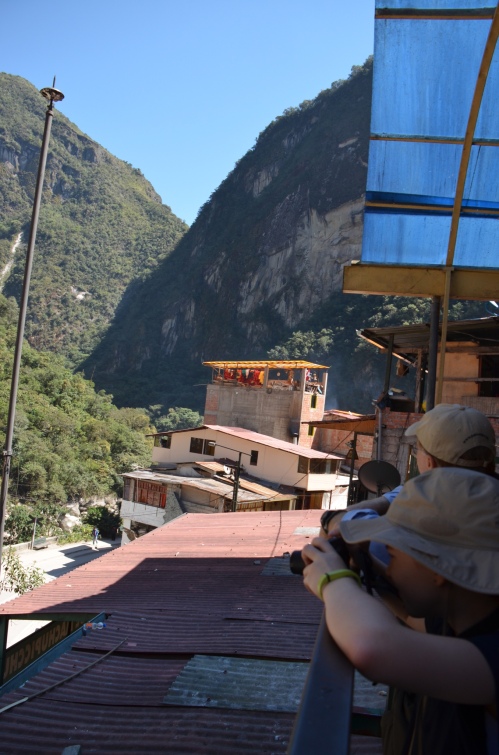 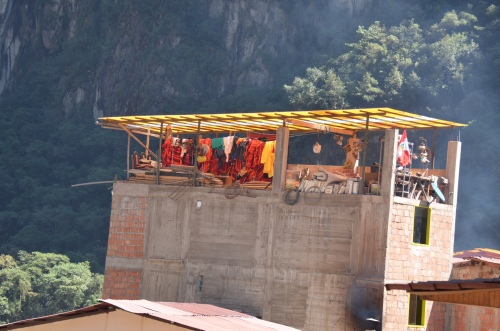 We saw trail porters lugging their client’s gear right up the main streets: 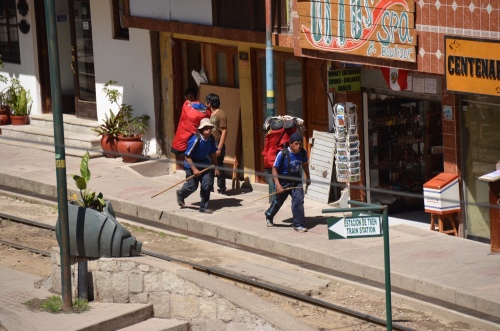 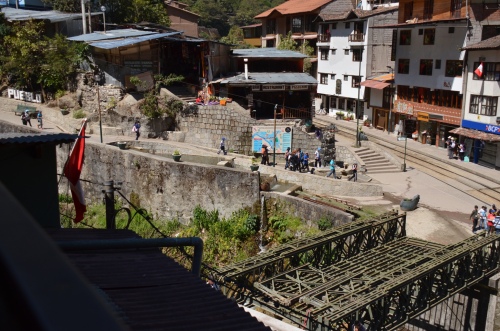 We went into a real grocery store, filled with fresh fruits and meats. 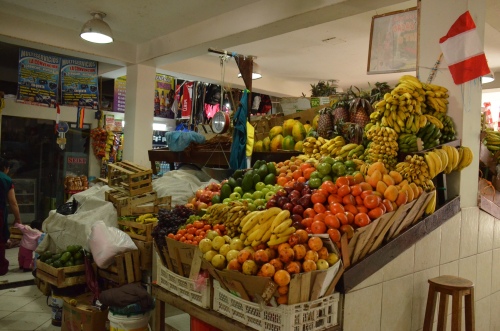 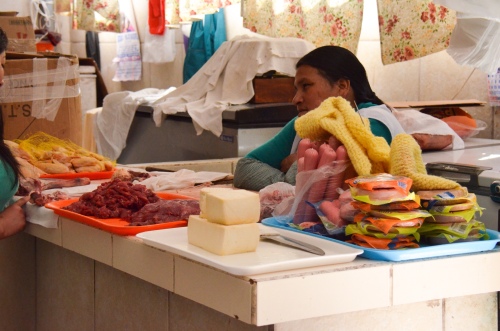 We shopped for souvenirs from a vendor in the bazaar. She told us the pillow cover was handmade by her grandmother. What a shameless tale! I don’t believe it for a second, but I bought it anyway. I just hope it wasn’t made in China.

We took the obligatory photo in the main square:

Our travel book was in our bag in Cusco, and wifi/cell phone service was non-existent, so we were a bit at loose ends as to what to do for lunch. The town is small, so we walked over to the train station, met Victor from Santuary Lodge, made sure our bag was secure, and asked for his recommendation for lunch. He steered us to Toto’s House, where we had a delightful, leisurely buffet.

The cook prepared the meat over an open flame: 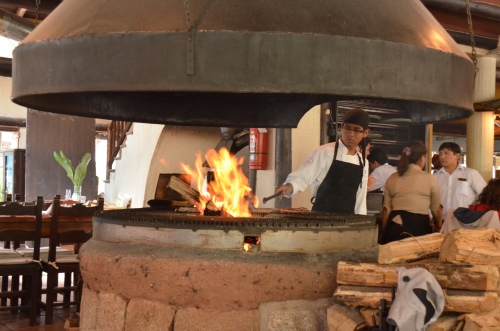 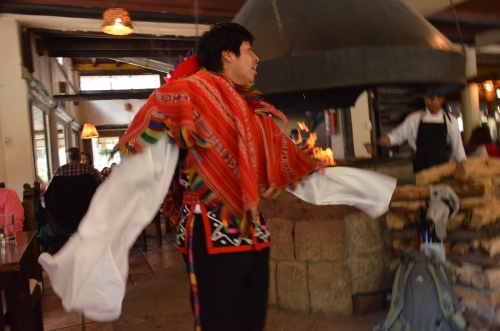 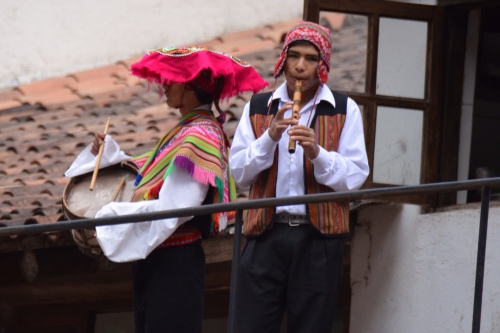 Somewhere during the lunch buffet, I noticed that my Fitbit was missing. I figure that it must have come unclasped somewhere on the bus ride down the mountain. There are so many buses and no way to tell where it might have dropped off, so I did not want to spend any fruitless efforts searching for it. I like to imagine that a porter is wearing it now, getting in his 10,000 step goal and sending taunts to his friends.

We walked around the town some more. The water rushes through the town center: 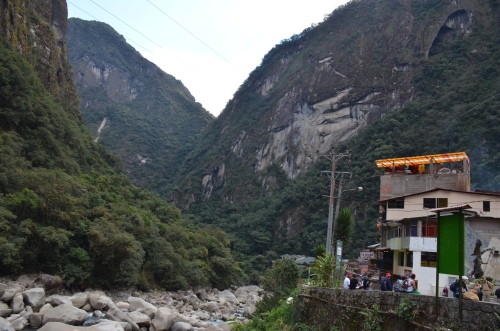 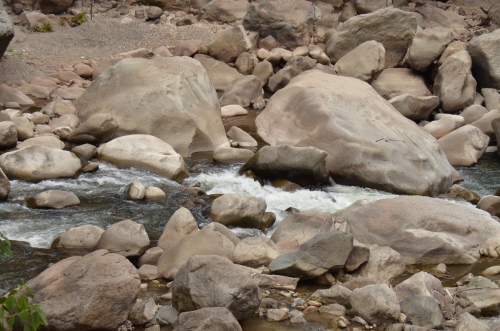 There are thermal springs here, for which the town is named. Many people come here to bathe in the healing waters. I chose to skip that part of the show. I’m an Arkansas girl. I grew up less than 100 miles from Hot Springs, Arkansas and have taken thermal baths there. I figured it would be a similar experience. 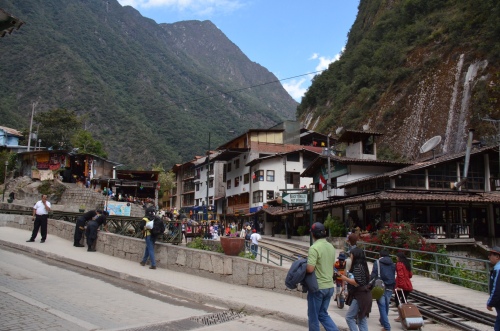 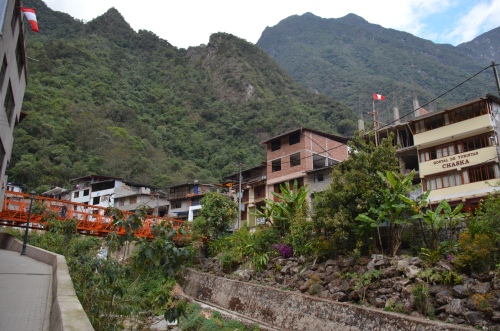 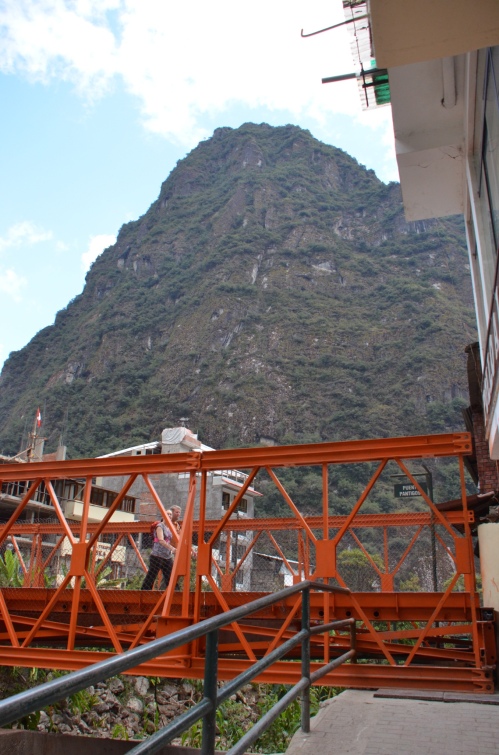 We saw lots of “dressed up” dogs:

Our train was to leave at 3:20 and everyone told us to be at the station 30 minutes early. We were content that we had seen the town and headed for the station early. (Prontosaurus). In the bazaar, we ran into our Machu Picchu guide Antonieta. It’s strange to have bumped into her that way. We exchanged pleasantries, and even she told us to make sure to get to the train station. The train waits for no man.

We found Victor again, and he did not just give us our bag. He carried it as he escorted us to a special lounge for the guests of Sanctuary Lodge. To my surprise, we would not wait in the train station with everyone else. We would sit on leather couches and be attended by Sanctuary Lodge staff. It was one final delightful perk from our stay. They brought us Coca-cola and water, and our waiter told us, “I will make sure to tell you when your train is here and assist you with boarding.” This is the life!

Watching the trains come in:

The Sanctuary Lodge private lounge at the station: 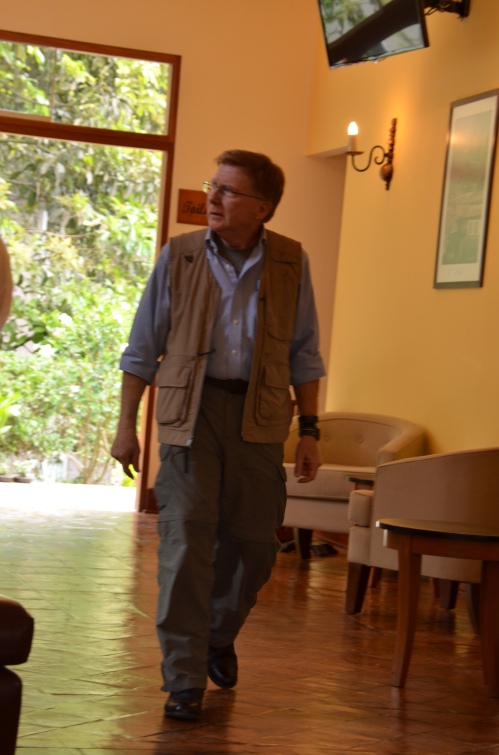 As promised, our waiter told us as soon as our train arrived, carried our bag, secured it, showed us to our seats, settled us in, and told us that he hoped we had enjoyed our stay at Sanctuary Lodge. We told him that indeed we had. The level of service at the hotel was like nothing I have ever experienced. We were greeted by name everywhere. Every need was attended to with understated grace. I enjoyed the pampering!

The train was more crowded than the one we rode up. The cars have several banks of four seats each with a table between them; think of them as tables for four. We had the fourth seat to ourselves on the ride up, and we assumed it would be so on the way back. We had our gear all spread out when our seatmate came up. Alas, we would have to share. She said simply, “This is my seat.” I began to try to organize and consolidate our gear. She waited about 20 seconds and asked me to move my bag (which was under her seat). I would have done without being asked, if she had just given me a second! She settled in, and it was clear that she wanted to pretend that we did not exist. Fine by me. She never said a word to us in 3 1/2 hours. I only know that she was a Canadian because I saw her put her passport on the table. I guess it could have been worse. She could have talked our ears off for the entire ride.

We had already experienced the same scenery on the way up to Machu Picchu, so we allowed Genene to play her DS and iPod, which she quietly and happily did. Greg napped some while I caught up on writing blogs. 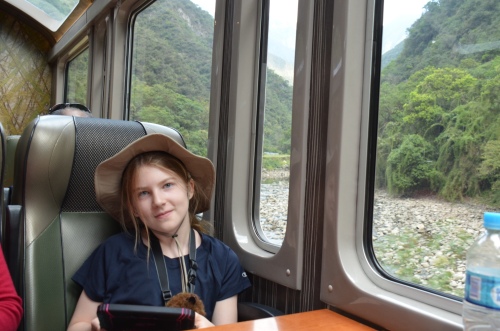 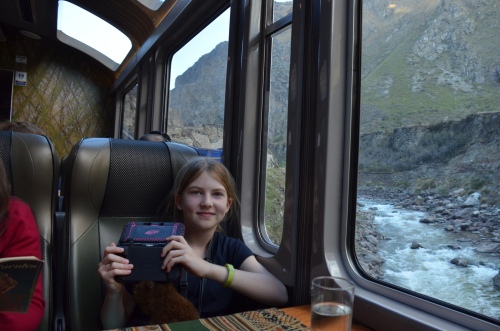 They served a snack, which was hearty and delicious. There was something like a vegetable empanada, fresh gooseberries, and a pastry. After the snack, a clown who came through the train car, dancing and entertaining. It was a fun diversion.

Look at the detail on the costume: 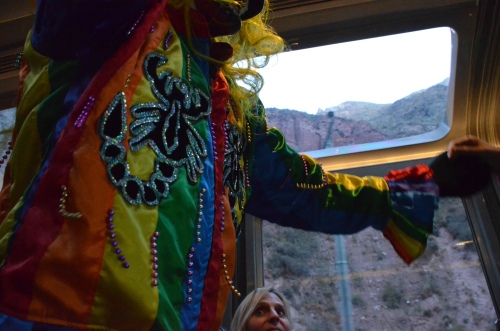 Here’s another view of the clown, along with the snooty Canadian who pretended to read for 3 1/2 hours so she wouldn’t have to speak to us: 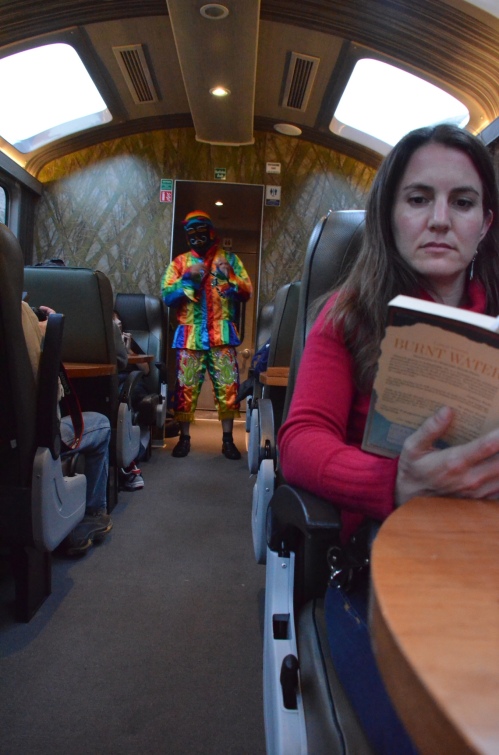 Later, some of the staff of the train put on a mini fashion show, modeling alpaca wraps and coats and then trying to sell them.

We arrived back in Poroy at 6:30 or so, and Carla was waiting for us at the train station. She showed us to our car, and we went through heavy traffic to get back to our hotel, Casa San Blas in the heart of Cusco. We were exhausted with the long day of walking around and riding the train. The bags we had left in Cusco when we went to Sanctuary Lodge had safely made their transit and were waiting for us at the hotel. We dug out some fresh clothes, washed our faces and went to dinner at the hotel downstairs. The dining room was very small, and service was slow. We probably could have done better just getting out on the streets of Cusco, but we were looking for convenience.

It was a long day. We hit the rack without even taking a shower. Tomorrow, we will whitewater raft.