Today was a real treat. We were “back on task, back on mission” (as Genene’s old school principal Mr. Bowyer would say). After all the drama of the medical procedures, we were ready to get back on our scheduled itinerary. The doctor who performed the endoscopy had told Greg that he should not do anything on our tour except perhaps the horseback ride. I knew that Greg would not be happy just sitting around, and we had said so to Carla. Carla said, “Don’t you worry, Mr. Gregory. I’m not going to cancel nothing!”

Greg felt up to it, so we resumed our normal vacation activities. Today’s planned event was whitewater rafting on the Urubamba River. Carla met us at our hotel at 10:00 AM and introduced us to our river guide, Jack; our driver, Kiko; and our kayaker Nacho. The drive to the put-in was about 90 minutes, so we had plenty of time to settle in, put on sunscreen, and just relax.

I took a few street scenes but not many. I did not want to risk getting any water damage to my Nikon, so we took Genene’s point-and-shoot. 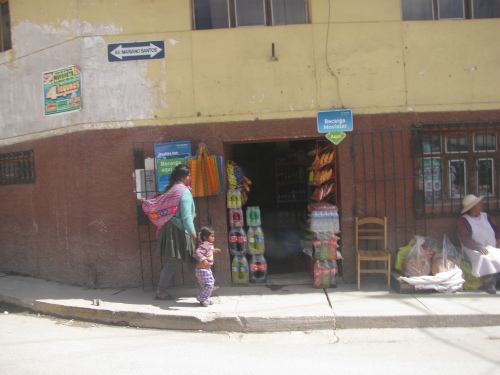 We made a bathroom and supply stop at a grocery on the way out of town, and Genene and I loaded up on chocolates and toffees. We offered them to Jack, Kiko and Nacho, and they readily accepted. We were all soon happily munching along. I think that Peruvians have a sweet tooth, so Genene and I would fit right in. Greg has never really enjoyed sweets, and the doctor told him to avoid chocolates anyway. He won’t have any trouble with that, but saying no to salt and grease and spice and beer will be more of a challenge.

We got to the put-in, and I was pleasantly surprised to find that we were on a private tour. Somehow, I had gotten the impression that we would be meeting others, as we had done on the via ferrata/zip line. Instead, we simply pulled over to the roadside, and Jack said, “Give us about 5 minutes to blow up the boat, gather the gear and get the dry bags, and we will be off.” 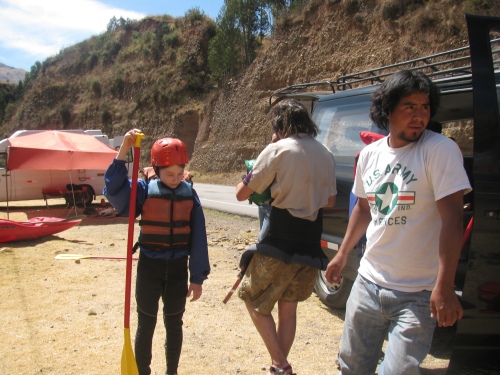 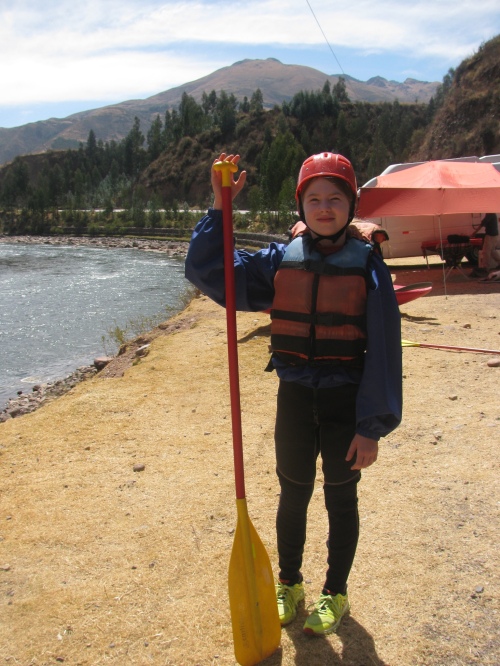 We were issued wet suits, helmets, life jackets, and one paddle each. The instructions were basic: forward, backward, stop and get down in the boat. If you fall out, lay on your back and point your feet downstream. Greg and I sat up front and Genene sat behind Greg. Jack was the boat pilot in the back. Nacho manned a kayak, which he would use for scouting and in case of a water rescue. Kiko would drive to the pull-out to get us.

Jack is suited up and ready to pilot us down the river: 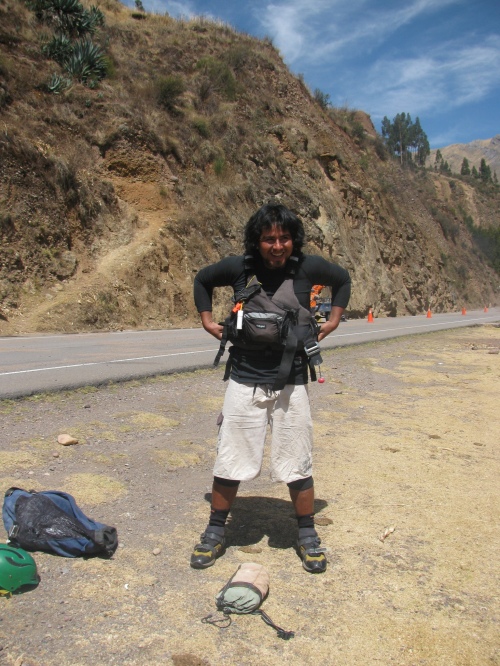 Jack noticed that we had a GoPro, and he offered to mount it on his helmet. We readily accepted. If I can ever figure out how to download and make youtube videos, I will share them on a supplemental blog. I do not have much patience for videos. Still camera photography is enough for me. 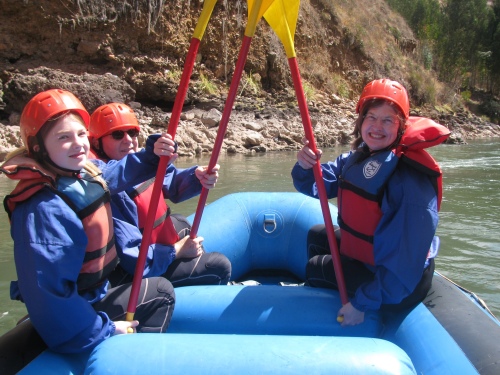 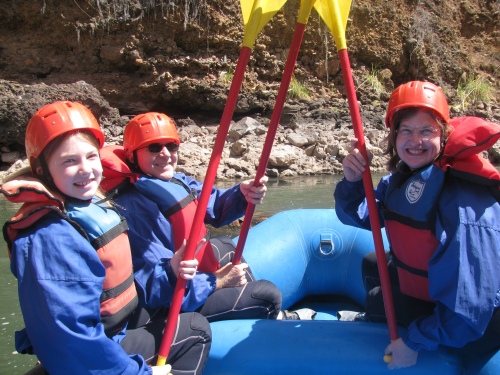 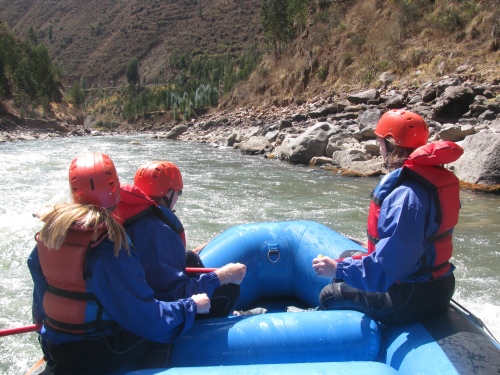 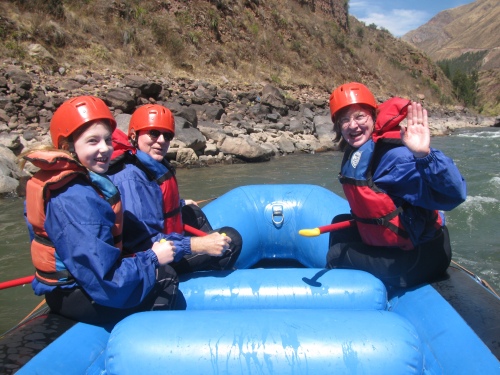 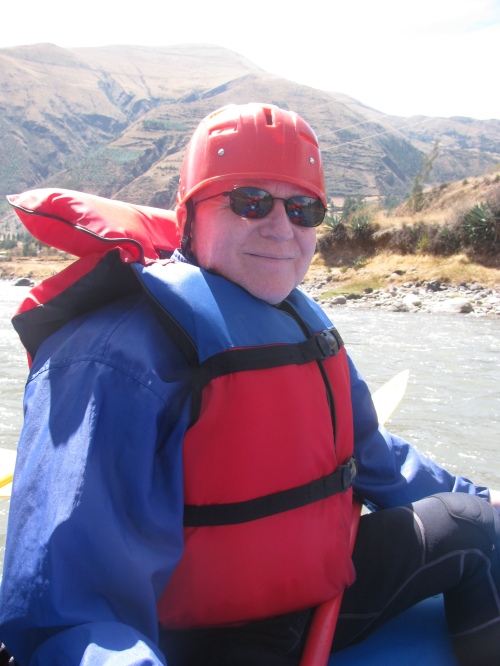 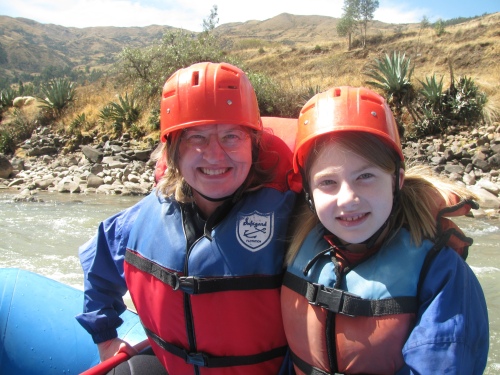 The experience was awesome. We went through Class I, II and III rapids. Jack maneuvered the boat with precision. He commanded us on how and when to paddle, and he did all of the steering. We just provided some motor support. I was amazed at how he could put that inflatable boat in just the right places to go through the rapids with ease. He told us he has been doing this for 10 years. During his off time, he is studying to become a chef. Gordons and Ayletts love food, and so we all had plenty to talk about!

We went about 5 1/2 river miles downstream, and it took about two hours. There was plenty of whitewater, and we got wet. Genene cackled with glee, as did her parents. The ducks flew along beside us and skimmed the river’s surface. We also saw seagulls. There were many people tending cattle and sheep along the riverbanks, including little boys and girls. They would wave to us from the banks and call, “Hola!” There were construction workers on the river as well, and they shouted words of encouragement (or perhaps they were jeers and mockery; I don’t speak Spanish).

We never fell in, so thankfully we never got to test Nacho’s rescue skills. I enjoyed watching him paddle his kayak with ease through the swift water. A good kayaker almost puts one in the mind of a ballet dancer. There is a lot of grace and power in the sport.

We got out of the water at 1:00 PM or so, and it was a short drive to our picnic lunch. We had been told we were going to have lunch beside a lake. I had been expecting an ordinary sack lunch, but what a surprise! Jack began talking about a “chef,” and we arrived to find a tent on the lake bank. 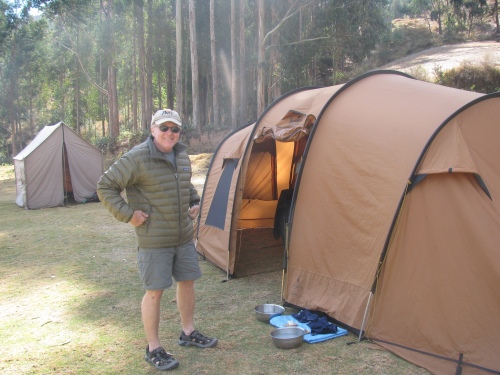 There was a handwashing station:

There was even a toilet tent! Now that is a luxury! 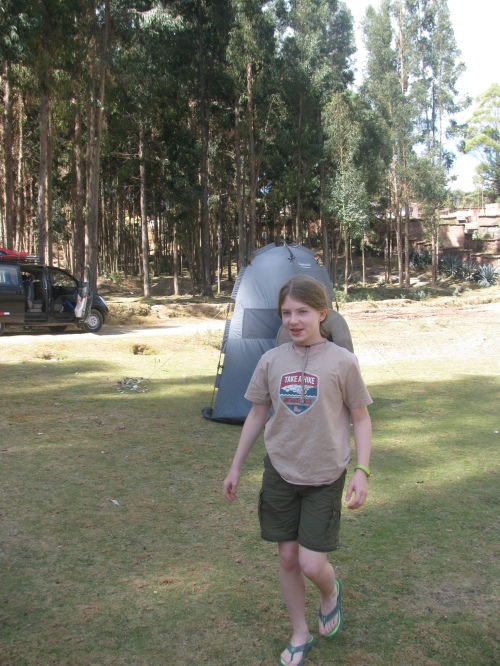 Inside the tent, a camp picnic table was set for three. Carla had advised the chef to alter his recipes to accommodate the doctor’s recommendation for Greg to cut down on spice and grease. We did not miss either! Lunch was delicious. We started with an avocado with dressing, following by quinoa soup. The main course was lomo saltado, a tradional Peruvian dish of beef, tomatoes, potatoes, onion, garlic, peas, soy sauce and vinegar. (It normally would be made with red wine or pisco, but the chef avoided these ingredients.) Dessert was a tangerine and a banana. Fully leaded Coca-colas and various flavored teas rounded out the menu. It was absolutely delightful. 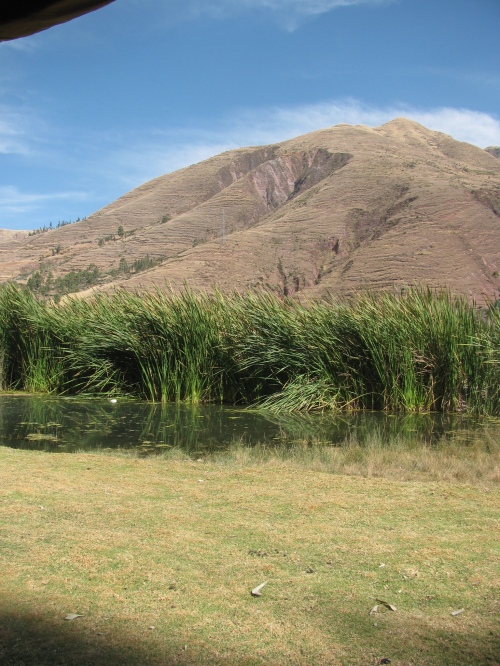 I was hanging around outside the toilet tent annoying Genene by taking her picture:

After lunch, it only took the crew a few minutes to break everything down and pack up: 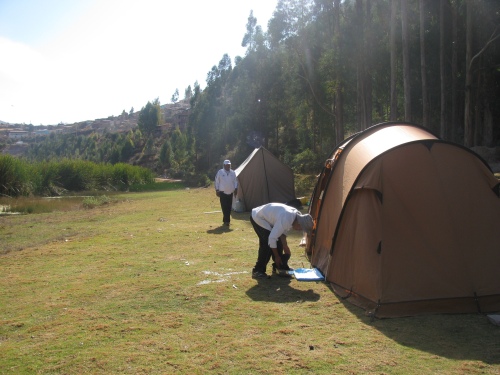 On the drive back, everyone except the driver and me collapsed into afternoon siesta. 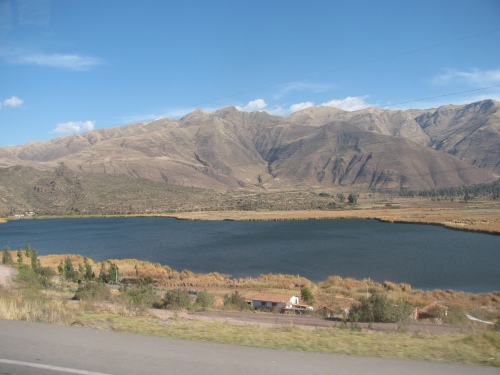 We were dropped off at our hotel door at 4:00 PM, and we immediately showered off the river water and sat in our fluffy robes for a while, relaxing.

By 7:00 PM, we were ready for some more chow. The altitude really seemed to stimulate my appetite, and Greg was also feeling stronger and stronger. We struck out from our hotel in search of grub, one of our favorite pasttimes! It was three easy downhill blocks to Plaza de Armas, and Carlos had recommended Inca Grill. We thoroughly enjoyed it. This restaurant could easily make it in Houston, a town where people appreciate good food and won’t stand for something that is trendy but not tasty. I had a pepper stuffed with quinoa and spread with goat cheese, while Greg had mashed potatoes stuffed with olives, raisins and cheese. That was just the appetizers. Genene had a pizza slathered with basil. For the main course, I had a traditional poached chicken dish (aji de gallina) that put me in the mind of chicken and dumplings (although there were no dumplings; that was just the taste of it). Greg had gnocchi with a basil cream sauce and pounded flat and breaded chicken breast. Oh yeah, and I had a pisco sour and followed it with a coca sour. Drinking those two cocktails made me feel lit from within like a furnace, which is not a good thing when it’s time to go to bed. We waddled home from the restaurant.

One piece of advice we keep getting in Cusco is this: “Walk down; drive up.” It’s a bit of a joke, but it’s not a bad concept. It was very easy going down, down, down the steps to Plaza de Armas to eat. It was a bit more of a challenge to haul those full bellies back up the hill.

It felt good to be back in adventure mode today!