We were supposed to start our day with a horseback ride. Carla met us in the lobby at 9:00 AM with some bad news. Our guide was ill. She offered to reschedule the event for afternoon with another guide. That worked for us. It simply meant inverting our plans for the day.

We decided to spend the morning at the souvenir market. We also had an errand to run. The medical clinic had promised to drop off all Greg’s test results at the hotel last week, but that never happened. The clinic was close to the market, so we thought we would drop in and take care of it. After all, who wants to have a second endoscopy?

On a lark, Greg decided to check in the front lobby of the hotel where we had stayed on our unscheduled visit in Cusco last week. Voila! The test results were waiting there for Mr. Gregory Gordon! We were so pleased that it was that easy. It will be interesting to see if our local doctor in Houston is resourceful enough to translate the results into English.

We strolled on to a large enclosed market and wandered from stall to stall. Different proprietors have different styles. Some leave you alone to look. Others start jabbering at you as soon as you get close to their wares and push things into your face. I wonder if that really works on anyone. I find it off-putting and leave quickly when I get that sort of bum’s rush. Genene found some earrings that she wanted, and I found several souvenirs. The trinkets are very reasonably priced, and bargaining is expected. I am not very good at that and always end up with the same annoyed feeling that I get when buying a new car. I usually confine myself to making one counter-offer and then meeting them in the middle.

We ambled back to our hotel loaded with our bags of trinkets and ate leftovers on the terrace outside our room. We all settled in for an afternoon siesta, and I worked a little on my blog.

Our guides met us at the hotel at 2:00 PM and drove us to Sacsayhuaman. We previously visited that site on the first afternoon with Carlos, but the ruins cover many acres, and we were headed for a totally different area today.

Our guide, Grimaldi, rode horses with us, and a young man followed along beside our horses. He carried a small switch and he made noises with his mouth and hands to encourage the horses to move. I was glad that he stayed very close to Genene’s horse the entire journey. Genene has taken riding lessons and sits her mount well, but I was grateful for the “insurance” of having someone nearby in case of trouble.

The horses were Criollo, which is a small horse native to Uruguay, Argentina, Brazil and Paraguay. Our guide told us that the big Peruvian Paso horses, known for their smooth gaits, were worthless in this high mountainous area. He told us that they would “just die here from a heart attack.” The Criollo horses are not much to look at. They are small, even scraggly looking. They are said to be among the best endurance horses in the world, giving the Arabian a run for its money. They are known for their ability to live in harsh conditions and are frugal eaters. I felt a little sorry for my mount because I thought he seemed to small for my ample American self. I should not have worried though. The little horse was as sure-footed as a mountain goat and walked easily up and down steep hills. None of the horses had shoes, but their hooves were sound and strong. We rode with Western tack, and I had a silver saddle horn, which made me feel very Spanish.

We posed before the ride started. Putting our helmets on over our boonie hats and baseball caps only adds to our glamour:

The cowboys discuss their mounts:

We rode some on the road and and on dirt trails: 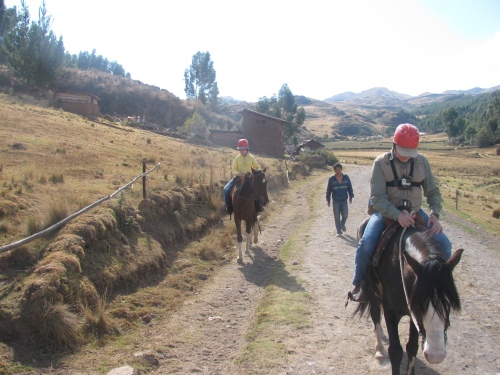 Genene enjoyed climbing in the rocks: 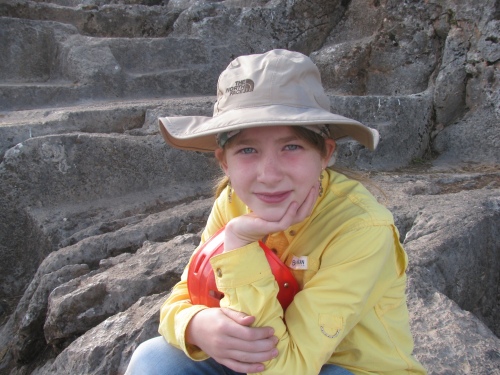 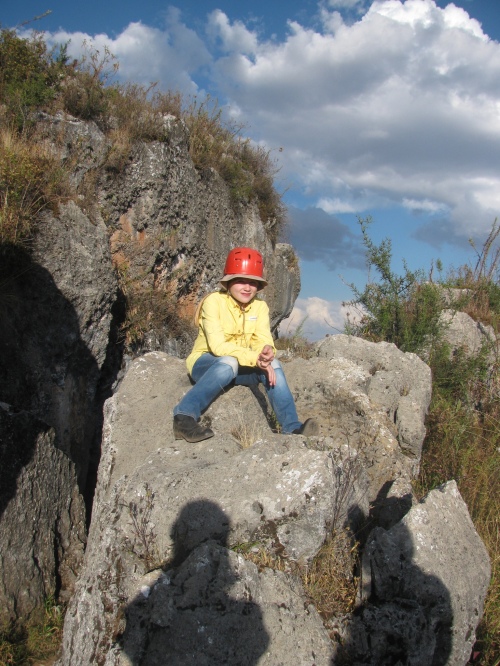 Our first stop was at the Temple of the Moon. The temple looks like a large hill from one side, and there are caves in it.

When you go around, you find the temple and caves carved into the rock: 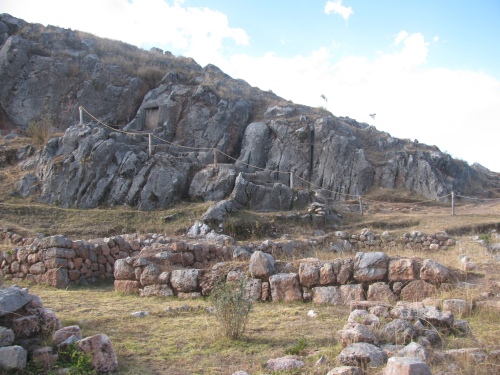 There are altars inside the caves, and cracks in the sides and top allow moonlight to fall inside. At least one of the crevices is aligned so that the moon can be seen during solstice.

There are carvings in the face of the rock. What went on here is a mystery lost in time. It is likely that there were rituals and sacrifices and offerings. Grimaldi told us that people still sneak into the caves at night to make offerings to Pachamama (Mother Earth).

There were also a great number of tunnels and caves around the site. In Quechua, the tunnels are known as “chincanas,” translated as “a place to get lost.” Some people claim that Inca mummies were secreted in the passages. Others claim that the Inca hid their treasures from the Spanish in the underground mazes, and that the treasures are so well hidden that they have never been found. Grimaldi repeated the local claim that the tunnels go all the way down the mountainside into Cusco and were used by Inca to hide treasure and travel secretly. We could go a little ways into each of the tunnels before being engulfed in complete darkness. Grimaldi told us that the Peruvian government has blocked all the tunnel entrances for protection of people. He told us that “several years ago” a group of young people had tried to navigate the tunnel system, never to be seen again. I tried to verify the story on Google and could not confirm whether this actually happened. What I did find was a lot of other similar legends about people being lost in the labyrinth. My favorite one is this one I found on another blog:

“A treasure hunter slipped into the tunnels outside Cusco. In his search for riches, the man became lost and wandered through the maze of tunnels for several days. One morning, about a week after the adventurer had vanished, a priest was conducting mass in the church of Santo Domingo.The priest and his congregation were suddenly astonished to hear sharp rapping on the stone floor of the church. Several worshippers crossed themselves and murmured about the devil’s demons. The priest quieted his congregation and directed that a large stone slab be removed from the ancient floor. The group was astonished to see the treasure hunter come up out of the tunnels carrying a gold bar in each hand.” 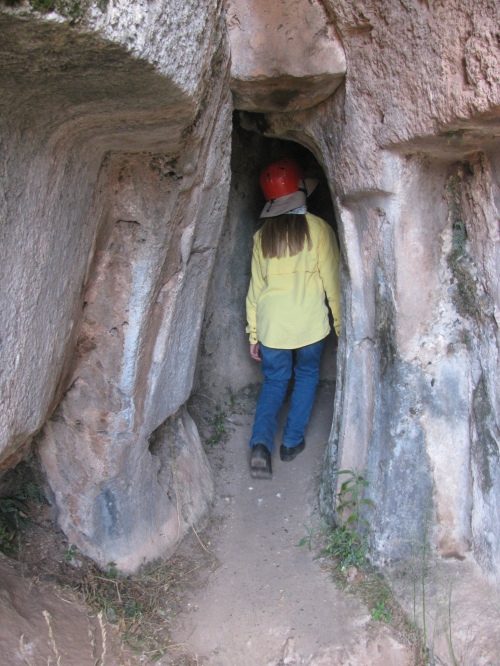 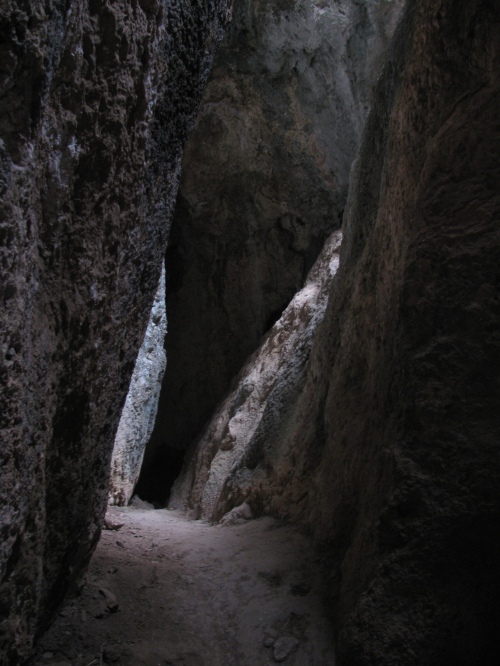 The vistas were stunning. Cusco was laid out below us in all its glory: 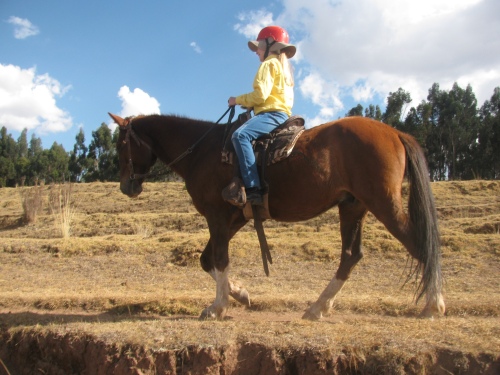 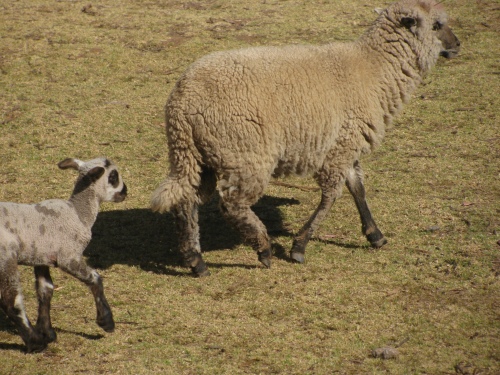 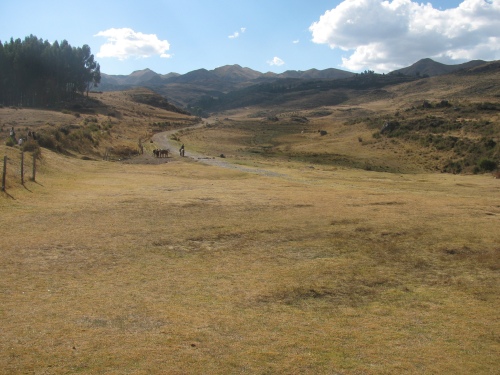 Genene followed Grimaldi into the crevices and tunnels without hesitation. I found some of the spaces tight, to my dislike. A couple of years ago, I had a shoulder MRI and discovered that I do not do well in confined spaces. I never balked during this tour, but I was always happy to come back out into the sun. 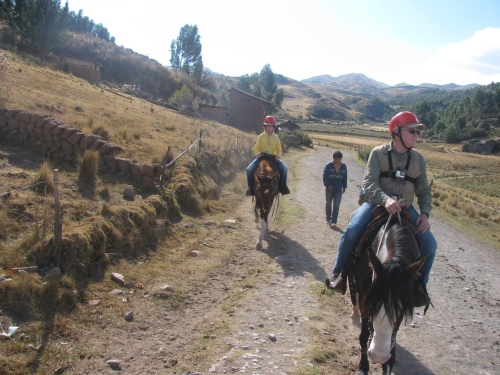 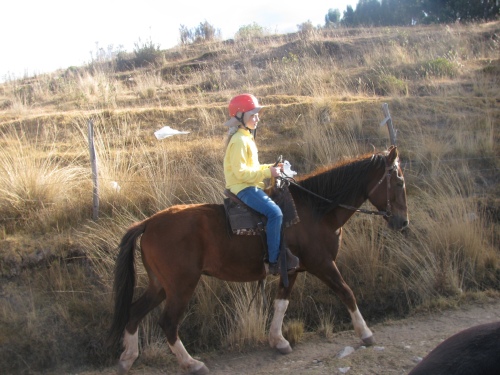 Can you see the serpent carved into the rock wall here?

What is that white spot in the field?

Oh, it’s some hippies. Wonder what they are up to?

I am not sure how this topic came up, but Grimaldi wanted to tell us a little about the native people of the Amazon rainforest. We are not scheduled to see this area of Peru. Perhaps we will get it done on another trip. Anyway, Grimaldi was trying to tell us about the tribal people. It took a while for us to understand because he pronounced the word tribal as “tribble,” and I kept having visions of the prolifically fertile little furry creatures from the long ago episode of Star Trek. How absurd. I KNEW he couldn’t be talking about that! When we finally understood his meaning, we were able make a little more sense of the story. Grimaldi told us that the tribals like to have many wives, and he leered as he told us how lucky the tribal men were. He asked if we had anything like this in our country, and Greg said, “Yes, we do. We call them Mormons.” I had to mop clean-up on that and tell Grimaldi that not all Mormons practiced polygamy and that in the United States, polygamy was illegal. Grimaldi looked a little wistful. I think perhaps he wishes for the days of old, or maybe he just wants to be a tribble.
We finished our tour of the ruins and got back on our ponies. I was impressed with the scruffy little horses. As we rode through the eucalyptus groves, they picked their way with ease. When the hillsides were steep, they chose to switchback on their own, without any guidance from us. They knew exactly what to do.

I wanted to mention how variable the weather is at all times. When the sun is high in the sky, it can be very warm. In fact, the Andean sun burned me right through my clothes. On several nights, I came home to find my back and shoulders red, when I had worn long sleeves all day. However, as soon as the sun goes behind the clouds or a mountain, it quickly becomes cold. As we rode into the late afternoon, the wind picked up and it was quite brisk.

We finished in the late afternoon and took a last couple of photos with our mounts and guide:

We got back to our hotel in San Blas as the sun was going down. I took a shot from the terrace. I love the warm terracotta colors of the roof and the pots.

We were all a little tired of the Peruvian spice and went the “comfort food” route. Our guide books gave a glowing review to a nearby pizza joint, La Pizza Carlo, and so we walked down the steep hill in search of chow. We found the place, and it was charming. There were only four tables in the restaurant.

We ordered a Hawaiian pizza and watched as the cook cut open the fresh pineapple and loaded all the toppings. The wood burning oven was in the dining room with us, so we could keep warm and watch our meal cook:

We couldn’t take away any leftovers because we travel tomorrow, so we sucked it up and ate every single bite. Sacrifices!

On the way back up the hill to San Blas, we bought some souvenirs from a shop we had gone into several times along the way. There was a little mirror that I had my eye on, and in all our shopping in Cusco, we never saw another one like it so I had to pounce.

We will be sad to leave Cusco but are looking forward to seeing Lake Titicaca. Doesn’t everyone love to say “Lake Titicaca”?