We are leaving Cusco today. We saw more of it than intended, but we could have easily stayed longer. It is a nice city and a good base of operations to see the Sacred Valley and many archaeological ruins.

Our plane did not leave until 2:30 PM, so there was no need to wake up at the crack of dawn. We slept until 7:00 AM, got up, and started packing. We spent three nights in this hotel, so we had time to spread our gear to kingdom come and back; packing took a while. Also, we had bought some souvenirs, just enough to take each of our bags to the 50 pound limit. We had to keep weighing the bags and taking a little out of one and putting it into another before we got all three under the limit.

Last views from our terrace:

This was our view of the hills of Cusco from the bedroom window: 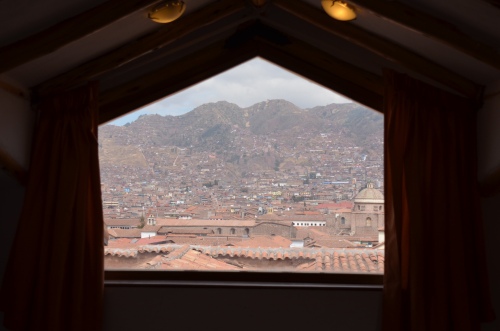 Check-out was at 10:00 AM, so we tucked our bags into storage and went down to Plaza de Armas just to sit on the park benches and relax.

Down the hill we go. Look at the Inca stonework on the left: 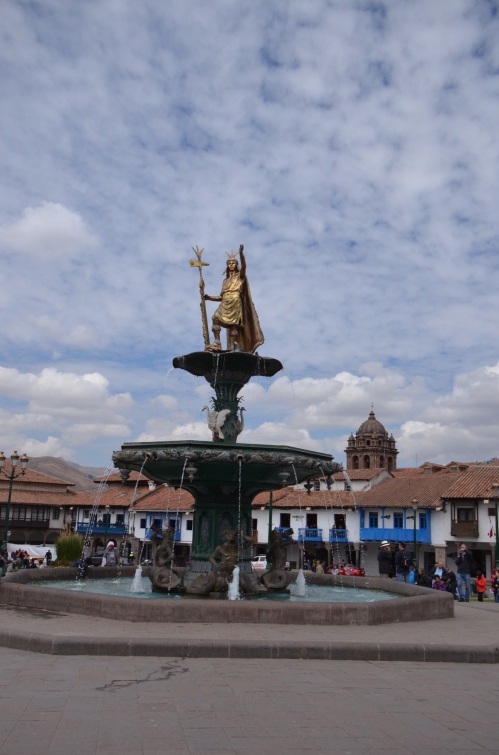 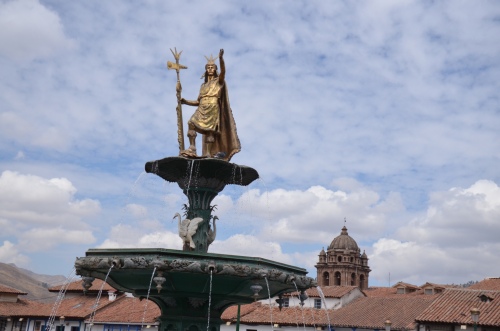 Blanco Cristo sits on the edge of Sacsayhuaman:

The street light posts use the sacred puma motif: 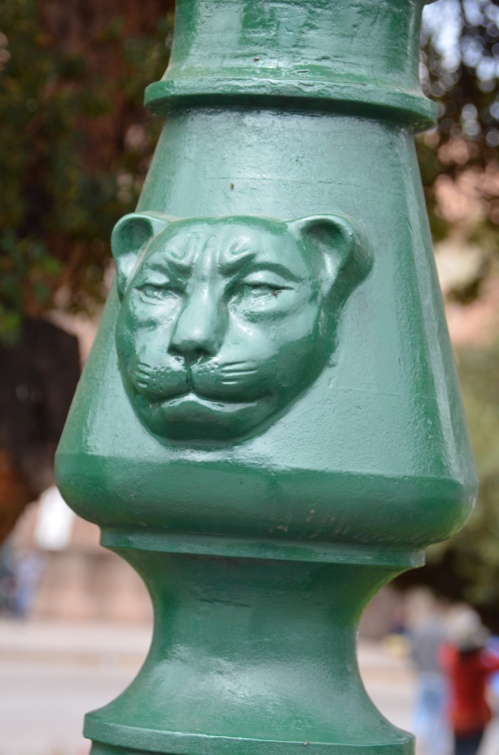 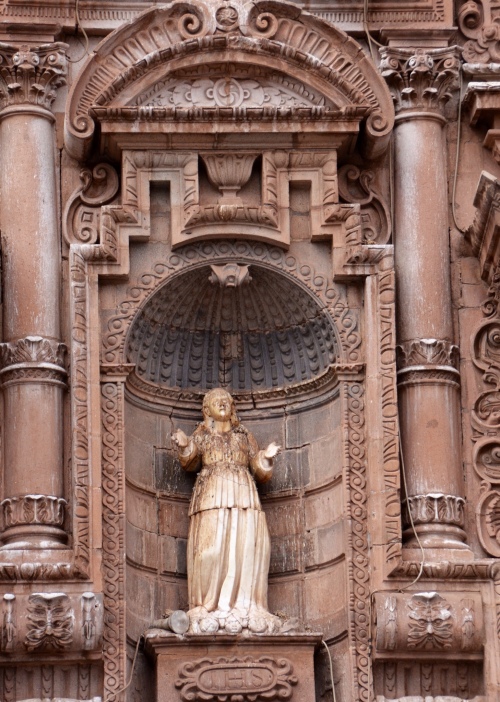 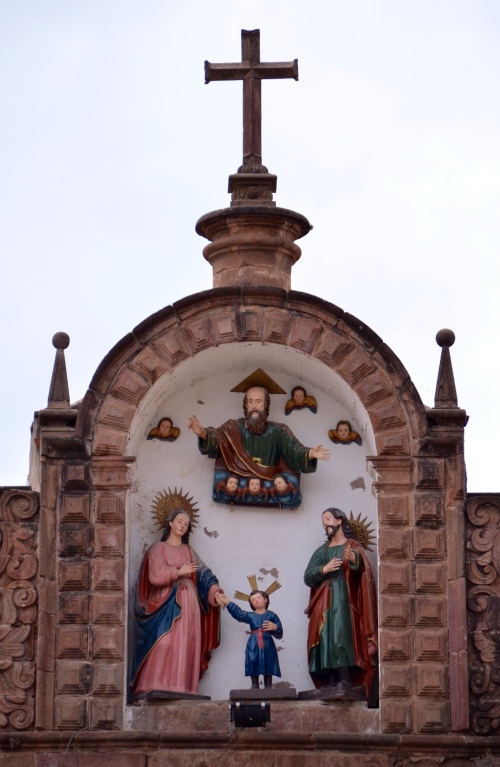 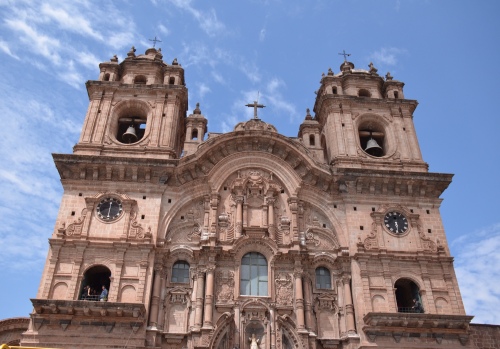 Hey look! A Starbucks! We can all agree this doesn’t belong on the plaza.

I’m no Pope, but I point at the Catedral!

Genene creates a bit of a sensation here. The first time we observed it was with Carlos on the day trip to Ollayantaytambo last week. Families want to have their photos taken with Genene. I am not talking about the people who dress in traditional garb and try to get you to pose with them and their lambs or llamas and then ask for money. These are regular Peruvian people in street clothes. It looks like they are on holiday themselves, with cameras dangling from their necks. Many of them politely ask if they can have a photo with Genene. Carlos explained that her blonde hair and blue eyes are what the people find interesting. Anyway, today in Plaza de Armas, Genene was like a rock star. She quit counting at the 13th request for her photo. Entire families would crowd to the bench. They would sit their smallest children down next to Genene. A couple of times we saw people “sneaking” pictures. They would ease around behind the park bench and pretend to put the cathedral in the shot, but you could see the photographer and the subject communicating as if to say, “Get closer to the girl.” Genene said that she did not like it, but I was flattered on her behalf. It also makes me stop and think. I often sneak photos of local people myself. I try to use the telephoto lens and capture them without their knowing. Is it rude? I don’t know, but we experienced a bit of turnabout in the plaza today.

Here’s a stealth picture in progress. The lady sat down on the park bench and her friend is snapping. Greg ended up striking up a conversation with them, so they ceased their ruse and got some posed shots later.

I spent some time walking around the plaza getting candid shots of the people.

This old guy was selling his photographs to people. I am not sure how he did it, but he would take snapshots and then run down the plaza and get printed copies. I like his suit.

We always felt very safe on the streets of Cusco. Police officers were everywhere. 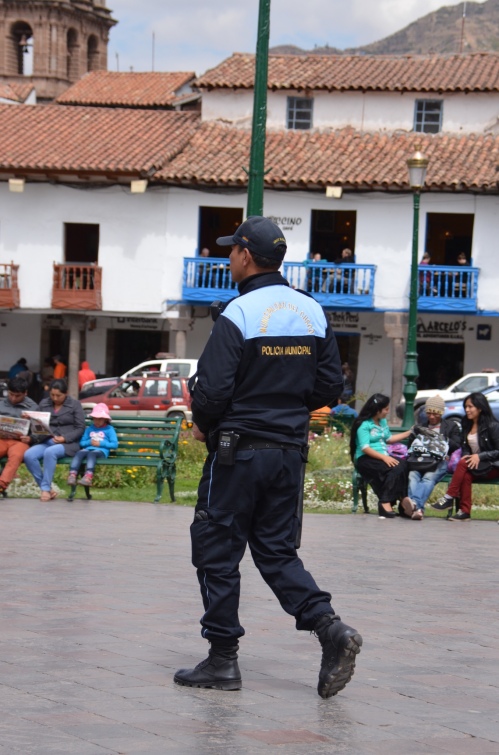 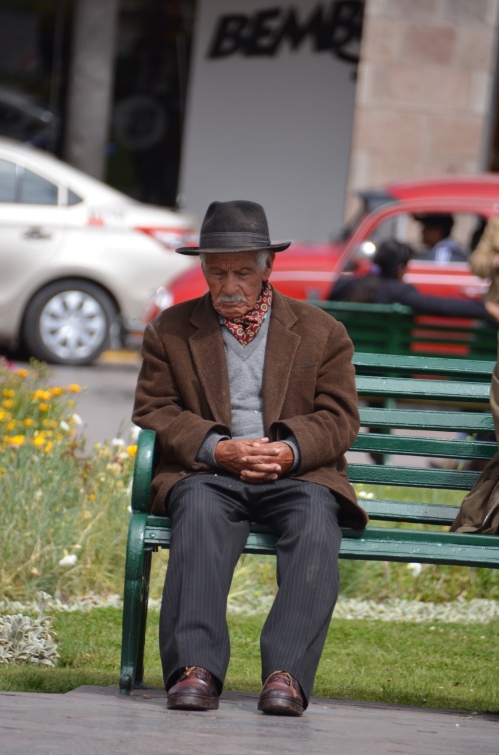 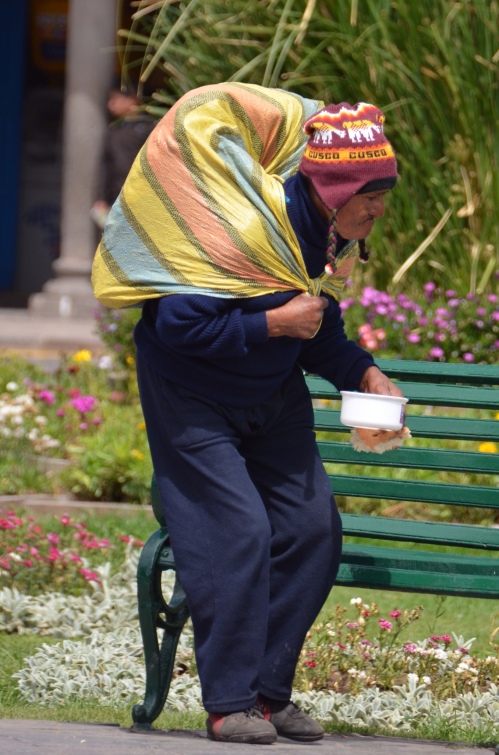 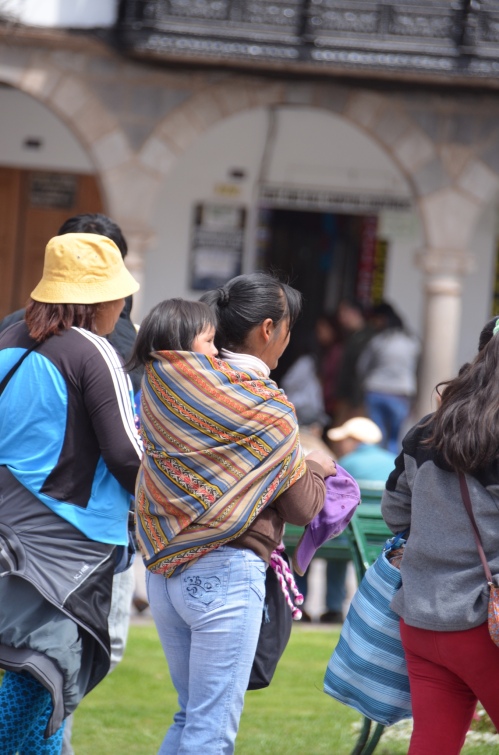 This next sequence of shots is among my favorite from the day. This lady and her little boy are trying to sell little dolls and trinkets on the plaza. There are many people like them in the public areas. As a rule, they were much less aggressive and annoying than, say, the Roma people you find in Rome and Paris, who hound you mercilessly and try to shove things into your hands. A simple “no, gracias” is usually enough to send the Peruvian hawkers away.
She gets out her dolls. “I want to help, Mommy.” 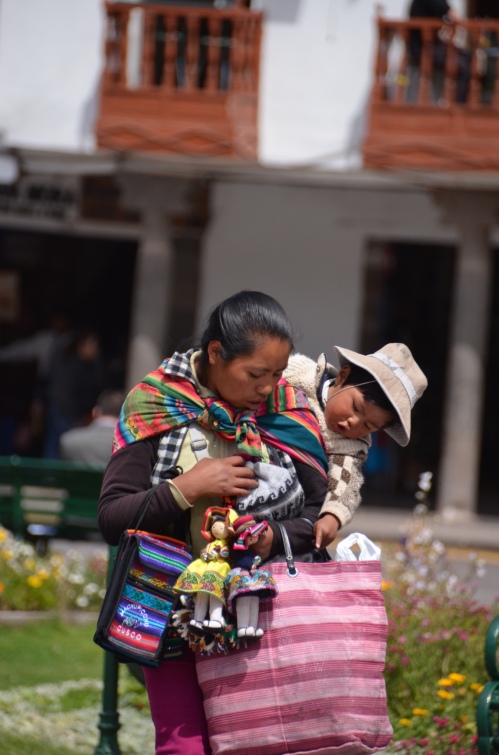 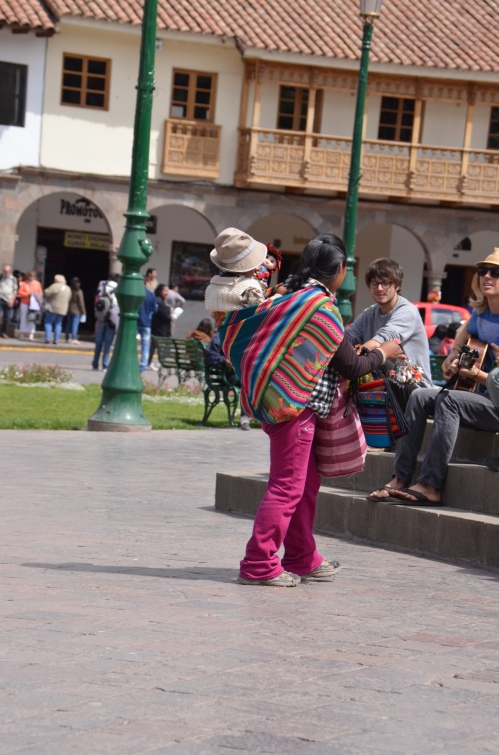 We lingered in the plaza as long as we could, taking in the sights.
We strolled back up the hill to our hotel. Along the way, we stopped to say goodbye to Hatunrumiyoc, the famous “stone of 12 angles.” We had passed it each day on our walks to and from the plaza, and it always drew a crowd. There is usually a volunteer guard posted there who admonishes people not to touch the stone. No one was there today, and we got away with a tiny touch. The original use of the building is unclear, but the common opinion is that the building was the palace of Inca Roca, the sixth Sapa Inca who ruled sometime around 1350. There are many mysteries in this country. There was a major earthquake in Cusco in 1950, and it unearthed Inca walls and ruins that had been covered over by Spanish construction for centuries. The original use of many of these structures is unknown to us now. Cusco is now a UNESCO World Heritage site.
Touching Hatunrumiyoc:

How in heaven’s name did they carve a stone like this and fit it into this wall?

Last looks at the hill we trudged up each day:

Genene and Greg haul it up:

This hill really took it out of us every time we climbed it: 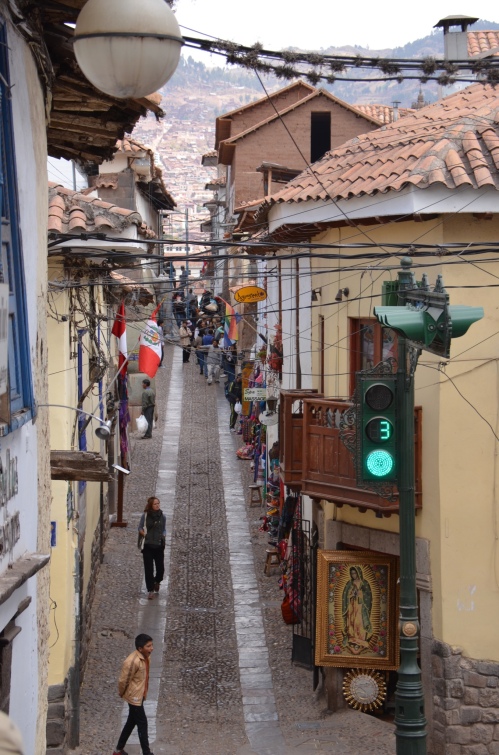 We got back to the hotel and sat in the lobby, waiting for Carla and drinking coca tea. Carla arrived on time and gave us our paperwork for the next part of our journey. Today, we will be traveling to Juliaca via airplane, then to Puno and finally to Lake Titicaca. She gave us our plane tickets and told us that she would be turning us over to a colleague in Juliaca for the remainder of our journey. Carla has become a daily fixture for us. We will miss her calm presence. I still cannot believe that she sat in that endoscopy room with us, translating and taking care of us. She is phenomenal. We took our picture together at the hotel before departing. 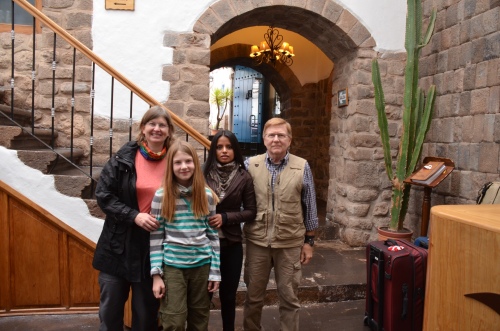 The commute to the airport was an easy half hour. Carla took us all the way to the security/boarding area, a luxury we lost in the states after 9/11. There were hugs all around, and she told us that she would call us tomorrow and the next day to make sure we were still doing okay. I will be forever grateful for what she did for us when things went wrong in our journey. That is the true measure of a business or a person. It’s not how we get things done when they are on track and easy: our true colors are demonstrated in how we rise tothe occasion when things go wrong.

The airport in Cusco was clean and bright. We were able to get a light lunch of ham and cheese croissants for all three of us for 18 soles (about $6.31). I dare you to do that in an American airport. While standing in the line for the croissants, I got annoyed with an American lady ahead of me in the line. She was asking 20 questions about how the various croissants were prepared: did they have meat? did they have cheese? I mumbled some ugly words under my breath, “@#$@#$, lady, it’s a croissant. This isn’t fine dining. Just order something!” A young Japanese man just ahead of me in the line starting laughing. I apologized to him for saying ugly things and he quickly replied, “No, it’s okay. I feel the same way.” I forget sometimes that English is spoken and understood by many, many people throughout the world.

It began to rain in Cusco, and the weather had everything backed up. Our flight was delayed by an hour, so we did not get to Juliaca until the late afternoon. Our local guide and driver were waiting for us, and it was easy to get our bags and get on the road.

The drive to Puno took about an hour, and we really feel as if we are at the edge of civilization. Juliaca looked much more “rustic.” The buildings were smaller and built more like shanties.

Our hotel is on the edge of Lake Titicaca. We arrived at night. We are leaving early for Suasi Island, so we will not get much time to enjoy this beautiful place.

A few quick views of the shores of Lake Titicaca, as seen from our hotel: 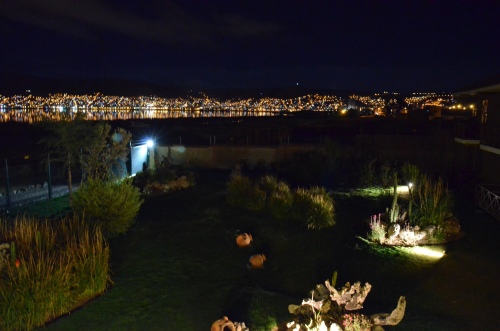 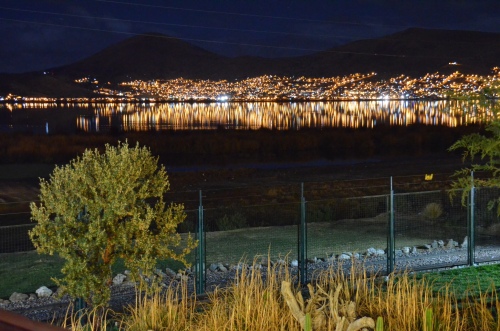 This hotel room was by far the most spacious and luxurious, as far as the physical features go. (Nothing can compare to Sanctuary Lodge’s service!)
We had a delicious dinner at the hotel and retired back to our room.
Genene jumped in the big bathtub and did not want to get out:

For the price of a few soles in his palm, the bellman came and lit a fire in our room. The place was toasty all night long. 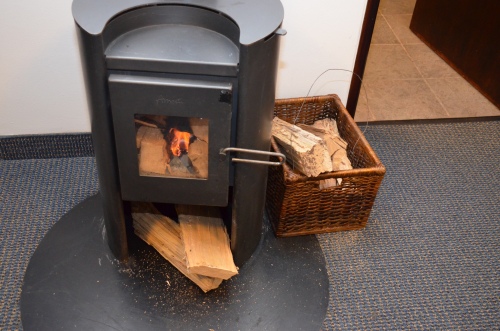 We sail at 7:00 AM tomorrow, so there is not much rest for the weary. Lake Titicaca awaits!